Sorry Darbee, No Opting Out! 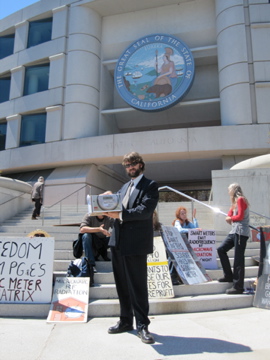 Yesterday, in front of a large audience of print, radio, and TV media, a growing grassroots movement of those opposed to PG&E’s smart meter program confronted Peter Darbee, the CEO of PG&E Corp. during his speech at the California Public Utilities Commission (CPUC) in San Francisco. They presented him with a ‘dumb meter’ symbolizing the ill-fated roll out of the ‘smart’ meter onto homes and businesses throughout PG&E’s service territory. While much of the audience continued to hiss and heckle at Darbee, others held banners and chanted outside along Van Ness: “1,2,3,4 SMART METERS NO MORE. 5,6,7,8 FIRST WE MUST INVESTIGATE!”  KTVU coverage of the protests can be seen here.

As residents continue to alert local governments to the threats posed by the new meters, the warnings seem to be gaining traction as every week new cities and counties add themselves to the list of those demanding an immediate halt to the installation of ‘smart’ meters. On Tuesday, the City of Watsonville joined Fairfax in stating its intention to pass a city ordinance banning the devices that would allow city police to arrest anyone trying to install a meter in the City.

While the most pressing concern centers around the health impacts of wireless radiation from the new meters, there have been a smorgasbord of problems plaguing the smart meter program since its inception in 2006. The meters will allow PG&E to disconnect power remotely from the head office, report detailed electrical usage data to the utility (and potentially to hackers who might use the information to aid in burglaries or identity theft) and have been widely reported to increase electric bills. They have also been reported to catch fire and disable electrical safety devices. 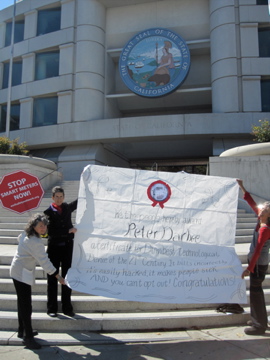 Certificate presented to Darbee on the steps of the CPUC

After the numerous disruptions, Darbee was forced into a sort of mea culpa for the devices. He stated that the utility was taken aback by all the controversy, and had just thought of the new meters as an “infrastructure project” that people wouldn’t really care about.

One can’t really blame poor PG&E. Who would have thought that a device attached to your own home that emits radiation linked to cancer, broadcasts intimate personal details of one’s home life, increases your utility bill, risks setting fire to your house, and contributes to climate change would bother anyone?

2 Responses to Sorry Darbee, No Opting Out!