A Right To Know? Not If the Wireless Industry Has its Way 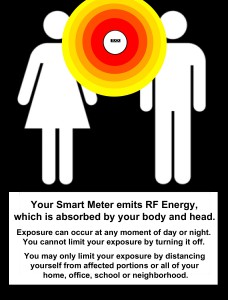 San Francisco passed a landmark ordinance earlier this year, which mandates that information about RF radiation exposure, a WHO class 2B carcinogen, be present at all cell-phone retail sites in the city, and given to buyers. If such an ordinance were passed to inform people about their exposure to RF from “smart” meters, what might the poster look like…?

The SF cell-phone right-to-know ordinance was put into effect on Sept. 30, with retailers to be given about three weeks to get into compliance. However, only a few days passed before the CTIA embarked on a lawsuit to stop the city instituting the ordinance. [UPDATE: CTIA appeals even the toned down version approved by Fed judge after first appeal.] The grounds? Infringement of the wireless industry’s freedom of speech. See below for when and how to protest this latest corporate obstruction of civil governance.

Information is the greater part of education—context and the tools of analysis making up the rest. But to start with information is crucial. Here are the details of SF Dept of the Environment’s ordinance. So what information does the new ordinance say must be given to those customers browsing or buying cell phones? Below are images of the poster (11×17 inches, displayed in store), fact sheet (comes with phone), and little sticker (to be displayed on spec sheets of phone features in the store).

But the twist is, I also have the drafts that–just five days before the ordinance went into effect–were the materials touted during a public workshop by the Dept. of the Environment as being under consideration. There is quite a difference from draft to final version in each of the items. The final versions are less emphatic, much more tentative, less bold—in all, just a little “nicer.” Well, SF, it didn’t really pay to “play nice” with the industry—they still slapped the city with a lawsuit. (Draft version on the left, final on the right.) 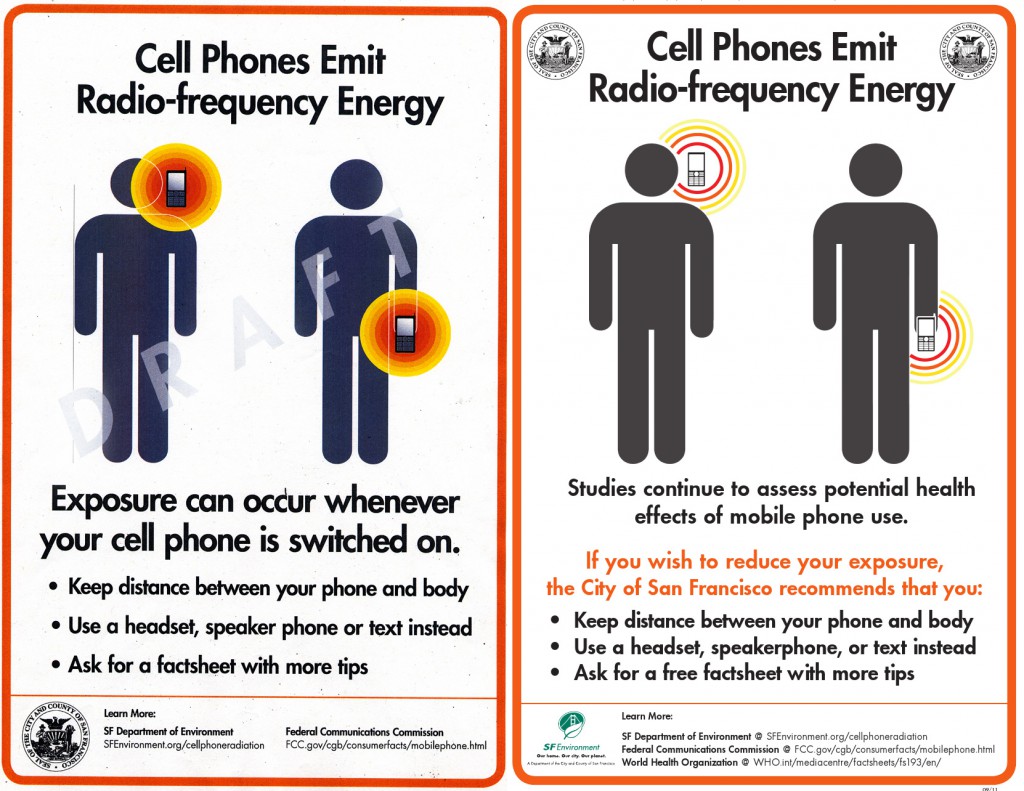 The Draft makes a clear & true statement about something that most people don’t know: “Exposure can occur whenever your cell phone is switched on.” The first statement on final is the usual mealy-mouthed sowing of uncertainty: “Studies continue to assess…” 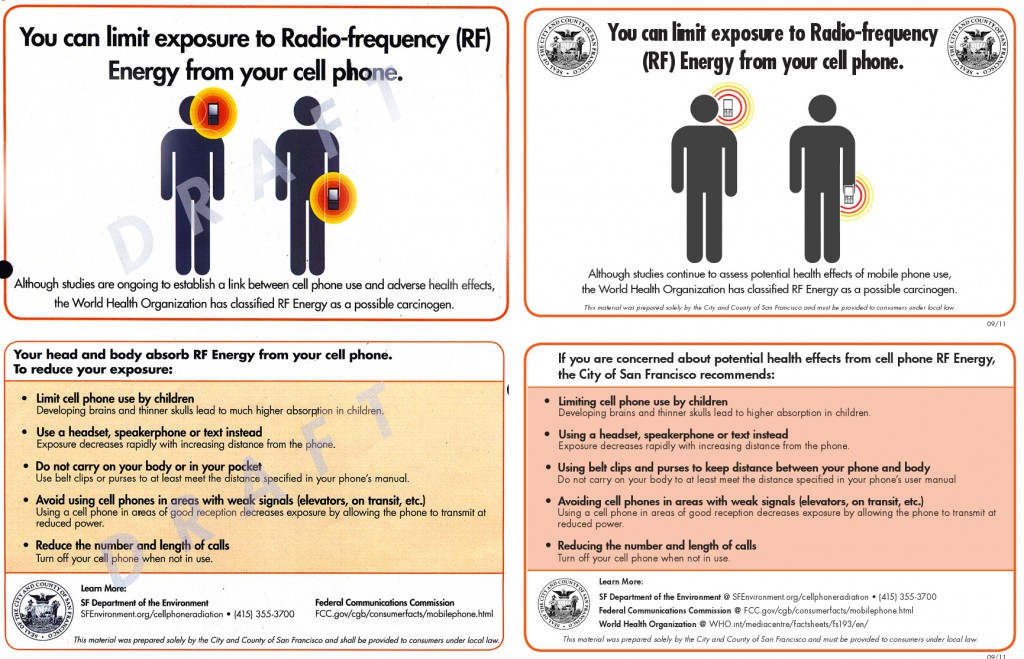 The change in font on the final version of the Factsheet (8.5×11 inches) makes the message at the top harder to read. The third recommendation on the draft, “Do not carry on your body or in pocket,” is changed to something messier and less definitive: “Use belt clips [a la nerd-style] …or purses [teen girls use back pockets because they don’t carry purses!] ”

And those little glow-circles of radiation just look so much less, well, radio-active, on the final versions! Practically sunny. They all but disappear behind the bodies.

This is the sticker, about life-size. It is required to go on any papers listing phone features. The draft version is an effective and bold use of a black background–it stands out. The final includes the niced-down phrase “If you wish….”

All of this raises in my mind the obvious issue of why San Franciscans and all of the rest of us don’t have the right to know about the true nature of the RF radiation that the “smart” meter emits. A cell phone at least comes with a manual.

PROTEST this intrusion of corporate power on one city’s attempt to educate its citizens: The court case against this right-to-know ordinance is to be heard on Thursday October 20, 8:00 am, at the Courthouse, 450 Golden Gate Ave, SF. Please join us! 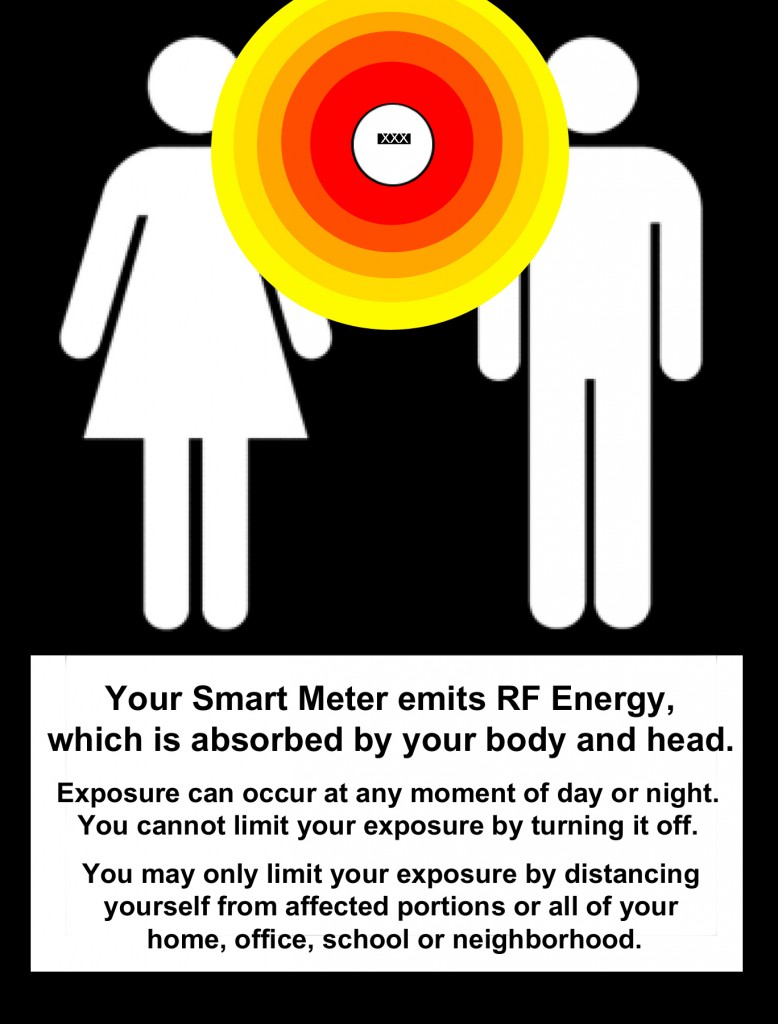 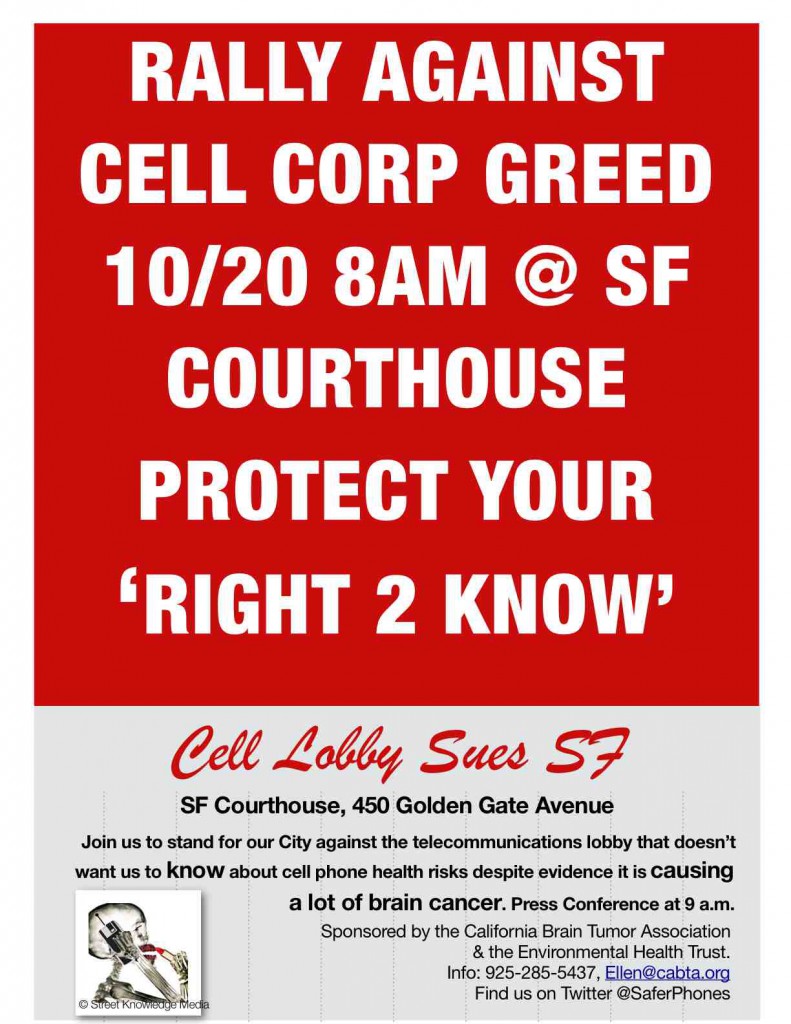 10 Responses to A Right To Know? Not If the Wireless Industry Has its Way