Merry Christmas Utilities- Here are Your SmartMeters Back! 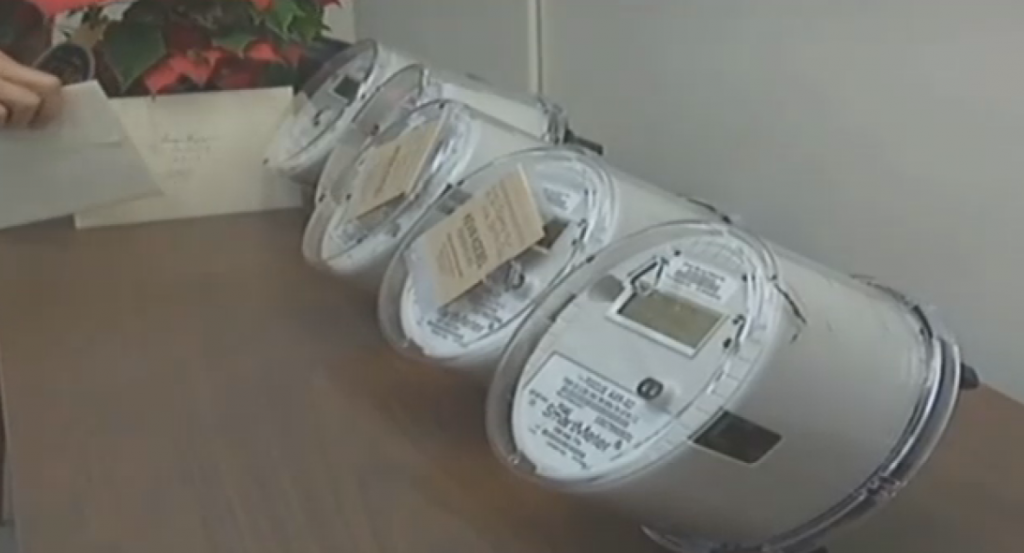 A lump of coal would have been too kind.

A row of unwanted ‘smart’ meters was placed carefully along with a Christmas poinsettia on the desk of CA state Assemblymember Bill Monning on Wednesday in Santa Cruz, CA.  Assm. Monning has stood up for individual residents against PG&E, but together with North Bay Assemblymember Jared Huffman, sponsored a whitewashed industry-led report minimizing the health risks of ‘smart’ meters in January- at taxpayer expense.

About a dozen people gathered at Monning’s office on Wednesday to demand to keep their safe, reliable analog meters at no extra charge, and to pull the plug on the hazardous ‘smart’ meter mesh network.

The event follows a similar smart meter return on Dec. 7th when more than a dozen residents very publicly had their ‘smart’ meters removed, returning them to PG&E offices in Capitola.  PG&E responded by cutting off their electricity, including to a 75 year old woman and a family with small children who suffered nosebleeds and headaches from sleeping next to the meter. Needless to say this didn’t go over well in the media (two weeks before Christmas) and PG&E were forced to re-connect the families- bizarrely with no meter at all.

PG&E’s media drubbing was so bad last week that on Monday they were forced to make what was billed as a major concession– they apparently now won’t shut off power to those who wish to keep their regular analog meter- as long as electro-sensitive people and others wary of having a carcinogen on their homes pay PG&E a protection racket of $100 to start and $20/ month.  And this was supposed to make PG&E look good.

PG&E thought that by bullying people and switching off their power, they could suppress the movement.   But instead they revealed just how low they are willing to go to prevent collapse of their stupid meter program, and how many ordinary members of the public would prefer living without electricity to continued exposure to ‘smart’ meter radiation.

More meter return events are being planned as we speak, to protest radiation emitting devices being forced on people’s homes.  Stay tuned.

THIS JUST IN- meter return madness spreads to Southern California:

7 Responses to Merry Christmas Utilities- Here are Your SmartMeters Back!