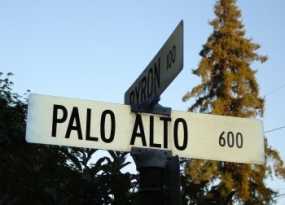 One more reason why it pays to have local–not corporate–control over essential public services.  Yesterday, after receiving testimony from those injured by smart meter radiation and hearing widespread reports of fires, health damage, privacy invasions and overcharges, the City of Palo Alto (adjacent to Stanford University and a center of Silicon Valley commerce) declared that no smart meters would be installed until 2015 at the earliest.  This is surely a black eye to the Electric Power Research Institute based in the City, who will retain an analog meter on their offices, even as they promote the toxic technology for others.

Palo Alto’s wise decision places it at number 50 in our list of California governments rejecting the current smart meter deployment.  Palo Alto’s decision, and reputation as a technological leader will make it that much more of an uphill fight to achieve universal installation, an increasingly futile battle being fought by smart grid proponents.  Unlike 50 other local governments, Palo Alto’s decision will not be overturned by force as the City retains municipal control over their utilities.

Later the same day, Goleta in Santa Barbra County officially declared their support for a free analog option from So Cal Edison, making it number #51.

“In yet another signal that smart meters have become the “new Coke,” openly despised and rejected by the public, another city has taken a stand against the unpopular wireless machines. Last night, Goleta City Councilmembers took great pains to express their concern and regret that they could not stop Southern California Edison’s (SCE) mass deployment of smart meters in their community, which is set to begin March 1st. One after the other, the legislators made it clear they wanted to do something to mitigate the forced installations.

After listening to residents’ pleas during two meetings (2/7 and 2/21), Councilmembers voted unanimously (5-0) to have their City Manager, Dan Singer, write a “strong” letter immediately – and send it express mail – to the California Public Utility Commission (CPUC) urging that the CPUC require SCE provide no cost Opt-Outs. The letter’s intent is to put the CPUC on notice that smart meter issues are not resolved to the degree necessary to protect consumers, which  echoes the letter sent by the County of Santa Barbara in July 2011.”

Utilities’ claims that they are in line with democracy are becoming further and further removed from reality every day.  If your local city and county has not yet taken a stand, why not bring some friends and family to the next meeting and encourage them to do so!  If your local city or state has already come out against smart meters, why not encourage them to go further and wrest control over critical public utilities from Wall St.