Tom Wheeler, chair of the Federal Communications Commission, and former head of the industry Wireless Association for 12 years, got an earful from protesters on Thursday during his visit to the Bay Area.   Organized by Stop Smart Meters! and the California Brain Tumor Association,  protesters gathered and expressed their anger at the industry/ government collusion that is failing to warn people about- or even acknowledge- the hazards of wireless technology.

From the morning as he arrived in Mountain View to the end of the Oakland event that evening, Wheeler was peppered with questions and dealt with disruptions about how he buried the science showing a connection between cancer and cell phone use.

As Wheeler stepped out of his limo in Mountain View, he was confronted by protesters citing the ill-advised plan to place wireless in all classrooms in the US- a plan called “ConnectEd” being spearheaded by Wheeler and Obama.  A teacher from the LA Unified School District who has witnessed firsthand the effects of wireless on schoolchildren repeatedly pressed Wheeler on the point that this radiation is already causing harm to our kids- and that wired computers (not a wireless Class 2B carcinogen) are safer, more secure, and can adequately prepare children for a future working with technology.

Ellie Marks (above and left) is Director of the California Brain Tumor Association.  Her husband has a brain tumor from the cell phone he spent hours on as a real estate agent.  As you might imagine, she is hopping mad at a system that is knowingly leading others into the same fate.

The FCC under Wheeler is salivating to extinguish our reliable, safe landline connections, leaving us dependent on an electrical grid made unreliable by ‘smart’ meters for even our critical emergency communications needs. 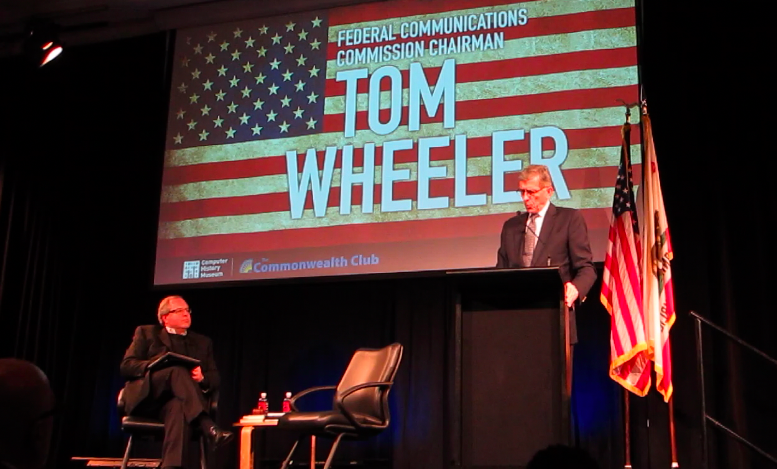 Wheeler had uttered no more than a sentence at the Commonwealth Club event before Stop Smart Meters! Director Josh Hart stood up and said in a loud voice, “Hey Tom, how many people have to die of brain tumors before the Federal Government will warn people of the hazards?   How many young women have to get breast cancer from keeping their phones in their bras before warning labels are introduced?  How many must be made electro-hyper-sensitive from a ‘smart’ grid that is harming our communities?  Are we just collateral damage in the industry quest for profits?  Are you happy with your purchase of the Chairmanship for $1 million from Obama?”  Hart was quickly led out of the room.

That wasn’t the only disruption.  Four others interrupted Wheeler’s speech, demanding answers about why Federal regulations on RF guidelines fail to protect the public from harm.  Ellie Marks ‘thanked’ Wheeler for her husband’s brain tumor.  Kevin Mottus from Los Angeles accused Wheeler and the industry he represents of carrying out a “sophisticated quiet holocaust.”  One by one, the protesters were led out of the room.  But the message was clear- California is growing more aware of the dark side of wireless and we’re not going to tolerate it quietly. 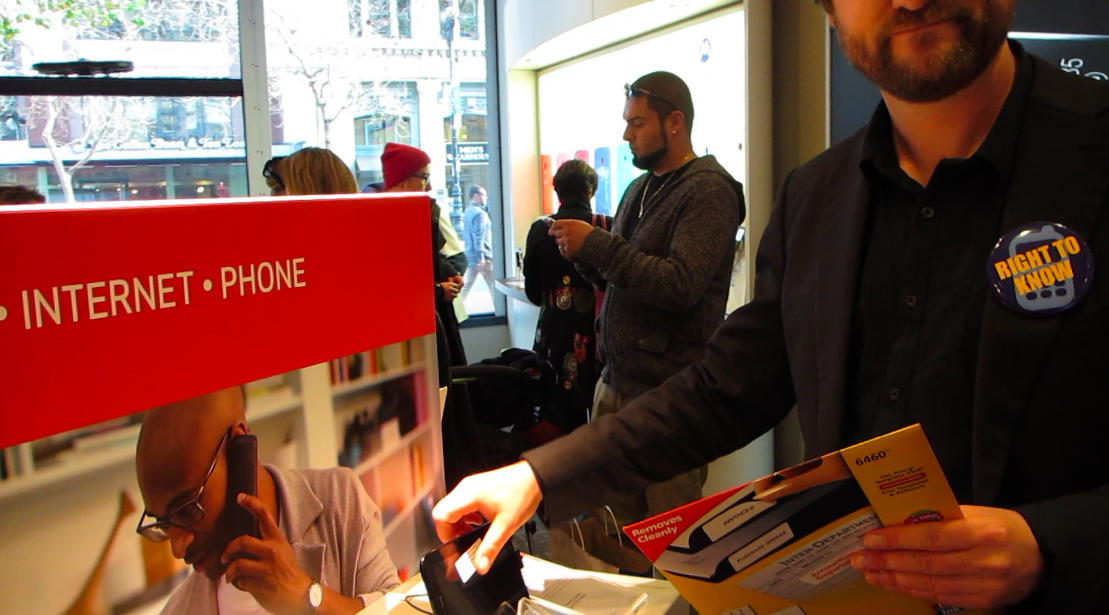 WARNING: This device emits microwave radiation that the World Health Organization states may cause cancer.  Children and pregnant women are especially vulnerable.

In 2011, the San Francisco Board of Supervisors unanimously passed an ordinance requiring similar warnings be placed at the point of sale, but the wireless industry sued, claiming they have a “first amendment right” to not disclose health hazards to consumers.  On Thursday, activists carried out their 1st amendment right to warn others of the dangers.  Many discussions were had with customers, an announcement was made out loud in the store, and the safety labelers refused to leave when asked to do so.  The action carried on for about 20 minutes, as staff went around and quietly removed the stickers from the phones as activists replaced them.  No police were involved and the activists left the store without incident.

At the evening event, Voices for Internet Freedom, Wheeler was greeted by death standing solemnly at the entrance.  At one point, he wandered the wrong way after being followed and questioned by an activist, and found himself surrounded by protesters shouting, “Wheeler buried the truth now we bury the dead.” He quickly scurried away, knowing that the truth was out there.   He looked like a frightened animal and you could see the pain in his eyes.  It can’t be easy to sacrifice people’s lives for profit.

A coffin was brought to the scene and ‘dead birds’ were scattered around the coffin to represent the insidious impact of wireless radiation on nature and wildlife.

Activists were more restrained inside the evening event.  SSM! Director Josh Hart was given 90 seconds to speak and said that “it is important to listen to the truth particularly when it is inconvenient or uncomfortable.  The truth is that wireless is hurting us, and as with most toxins, the ones who are marginalized and poor bear the worst impacts.”

Stop Smart Meters! thanks everyone who worked so hard to make these protests happen, and encourages those in other parts of the country to also give Wheeler a similar “warm” welcome when he comes to visit you.

Video of this day of action will be forthcoming.