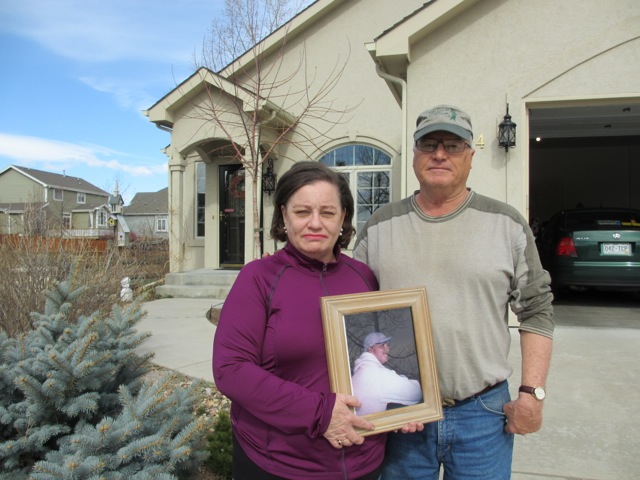 Craig and Virginia Farver stand outside their Fort Collins, CO home where their municipal utility forced a smart meter backed by police three weeks ago

The first stop on our WhistleStop Smart Meters! tour is Fort Collins, Colorado, where Virginia Farver lives with her husband Craig.  Their son Rich Farver died from a brain tumor in 2008 – part of a cancer cluster that they attribute to radiation from smart grid related antennas at San Diego State University.  Rich’s Glioblastoma brain tumor was part of a significant cancer cluster surrounding room 131 of Nasatir Hall at the University.  The room has since been converted to storage and the windows taped up though the university has stayed mum about the radiation risk on campus.

Stop Smart Meters! can reveal that the wireless system that was implicated in causing Rich’s death from a brain tumor was likely operating above already loose FCC guidelines for radiation exposure as early as 2002.   An article from Computerworld.com in November 2002 states:

“Computerworld received numerous e-mail complaints that HPWREN was in violation of FCC power limits following publication of its original story.  Steve Bragg, a senior electronics engineer at Internet Telemetry Corp. in Tulsa Okla., called the HPWREN San Clemente Island link illegal, saying, ‘If I was the FCC, I would bust these guys.'”

Apparently no one was ever “busted” by the industry-controlled FCC, and the tower continues to operate directly adjacent to classrooms next to where the cancer cluster was centered.

As a result of her son’s death, Virginia has become an outspoken and tireless local and national advocate for wireless safety, and was interviewed for the smart meter investigative documentary Take Back Your Power.

Fort Collins is home to several smart grid firms and has a municipal electric utility- City of Fort Collins Light and Power (CFCLP).  CFCLP took a $15 million federal grant and borrowed $15 million for the purchase of smart electric meters on homes, putting city residents into debt for the first time in 75 years.  Deployment of the system- which includes a network of surveillance cameras- began in June 2013.  There are also plans to deploy “smart” gas and water meters.  As of last month, less than ten households remain with their original analogs in a city of approximately 150,000 people.   This is not because everyone is thrilled by having a “smart” meter on their home, but rather the heavy handed tactics the city has been using to force these meters on people.

Nasatir Hall on the left of this photo was where Rich Farver spent much of his time prior to developing a brain tumor in 2008. A HPWREN smart grid antenna cluster towers over the building where more than a dozen people have developed brain tumors. SDSU refuses to investigate the deaths, or compensate the families.

Fort Collins’ utility- like some other municipals and co-ops- has been going above the law and forcing unwanted devices on homes, using the threat of electricity disconnection- or even arrest- to achieve their aims.  Though the Farver family has refused a smart meter on their home, with Virginia telling utility smart grid manager Dennis Sumner that “this is my home and I will not have a (smart) meter on my house.”  Sumner replied, “You WILL get a meter.”  This is despite knowing about the circumstances around the death of their son.

True to his word, on March 6th, utility workers escorted by police arrived at the Farver home.  Virginia was in the bathroom getting ready when the power went out.   Still in her pajamas and curlers, she got outside and discovered that the cage surrounding their analog had been vandalized.  The smart meter was already on their home and utility workers were standing there looking ashamed, their heads down.   A Ft. Collins police officer was standing on the Farvers front porch, the threat of force implicit.

A good number of Ft. Collins residents had been refusing to allow the installation, when CFCLP decided to get tough around Thanksgiving of last year, on the orders of City Manager Darin Attaberry.   One woman, Dorothy Boyd- told the utility worker who arrived to install the meter “I opted out.”  He answered “you can’t opt out.”  This is despite Fort Collins city code section 26-712 that allowed for a $11/ month fee for retaining an electromechanical analog meter (the utility claims that the council has amended the law recently to prohibit safe analog meters after many people opted out.)  That’s when she noticed the policeman in her driveway with his legs spread looking grim.   She was afraid of being arrested, so allowed the meter installer to proceed.

Another older lady- Dr. Ruth Shea- tried to video her encounter with the police when she was ordered to “shut the camera off.”  Many residents- including those who had caged their meters in self-defense caved when the police came around and threatened to arrest them if they did not allow the meters. 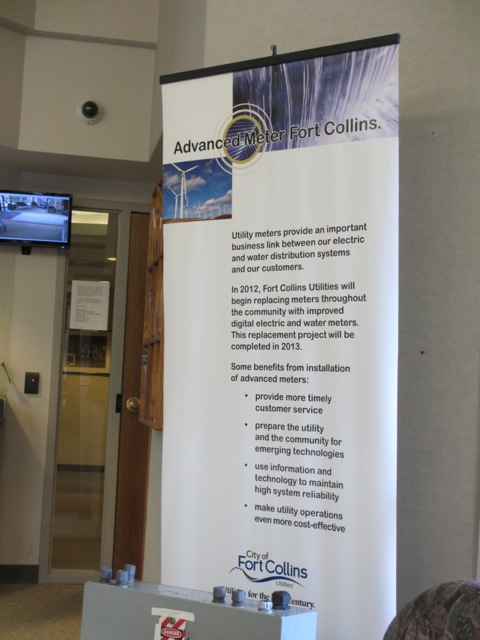 According to Wayne Sterler of the Ft. Collins Utility Department, these customers (who pay their bills but who simply intend to retain their analog meters) will be “denied access to city facilities and buildings” if they persist in refusing the “progress” that is being forced on them.

The following is an excerpt from the November 24, 2013 Fort Collins Coloradan (the full article has been removed from the website but is available for purchase here.  The article- though making reference to the smart meter program- in Orwellian style never actually mentions the word “meter”):

“Utility sites need a constant eye, Sterler contends.  The U.S. Dept. of Energy recommends electronic eyes on key infrastructure and a steady increase in hostility and aggression toward utility employees from irate customers has put the department on high-alert.

‘We’ve probably had six situations in the past 4-5 months where we’ve had police involvement with angry customers,’ Sterler said, ‘individuals that are just basically not happy with their service being terminated or just not happy with having to pay their bill.’

The utility department maintains a list of problem customers whose agitation has led to police intervention.

‘These individuals are put on a list, where if it happens again, they are basically not able to access public facilities owned by the City of Fort Collins,’ Sterler said.

So far none of the people on the list have been forbidden from visiting city property.  Sterler said the list is confidential.

Like Naperville Illinois, where two mothers were arrested last year for standing in the way of installers at their own home, municipal utilities (as well as rural “co-operatives” like PSREC who cut off our power last month) have been among the worst offenders of the law.  It seems that some “public” officials have decided that they can get away with violating the law as long as the public generally stays in line and doesn’t rise up to protest.   The utility industry imposing its will on individuals backed by the threat of police force is an alarming symptom of rising corporatism (or fascism if you can stomach the term).

As the demise of the distributed electricity model looms due to plummeting solar panel costs and cheaper battery storage, the industry is attempting to tighten its grip on the meters (they call them their “cash registers”) and the customers that they depend on for their enormous profits.

When there is free market choice about how to power your home or business, the utility companies know they will lose in the end.  That is why enforcement of your patronage- with their chosen equipment – is essentially being forced by armed officers.   And it may get a lot worse before it gets better.

Why have utilities generally not utilized the same tactics in places like California, bringing in police to force the meters?  It’s not because PG&E wouldn’t like to (they would).  It’s that they know that if they did, the public would not tolerate it- there would be protests and riots in the streets.  And that kind of spectacle risks the whole multi-billion dollar program, and is to be avoided at all costs.

Utilities and governments will do whatever they can get away with, pressing as far as the public will tolerate without rebelling.   This is political science, and they have well-paid strategists working on the most effective way to force their sick, invasive agenda on the public.

They look at the public like a boiling pot- turn up the heat so they can force the meters but turn it down when it threatens to boil over into rebellion.

“People are rising up in Florida- give them an opt out- they will settle down…” was bound to be one of the refrains heard in the halls of Florida Power and Light (FPL) for example.

California’s “opt out” policy was only introduced when dozens of residents of Santa Cruz began having the meters removed themselves and replaced with analogs.  In 2010 and 2011, smart meters were supposedly “mandatory” in California and police enforcement likely would have been imminent if it weren’t for fearless people willing to take a public stand.   The “opt out” policy of $10/ month for investor owned utility customers like PG&E fragmented the boiling mad public, and took some of the steam out of the opposition, which is exactly what they wanted.   Those people who didn’t want a smart meter on their home could pay for this choice- and many did- (though thousands have continued to refuse to pay).  Stopping entire neighborhoods and cities from being blanketed by pulsed RF radiation can seem somewhat abstract in comparison to simply defending one’s home.   However, a community defense approach to stopping the meters is absolutely key. 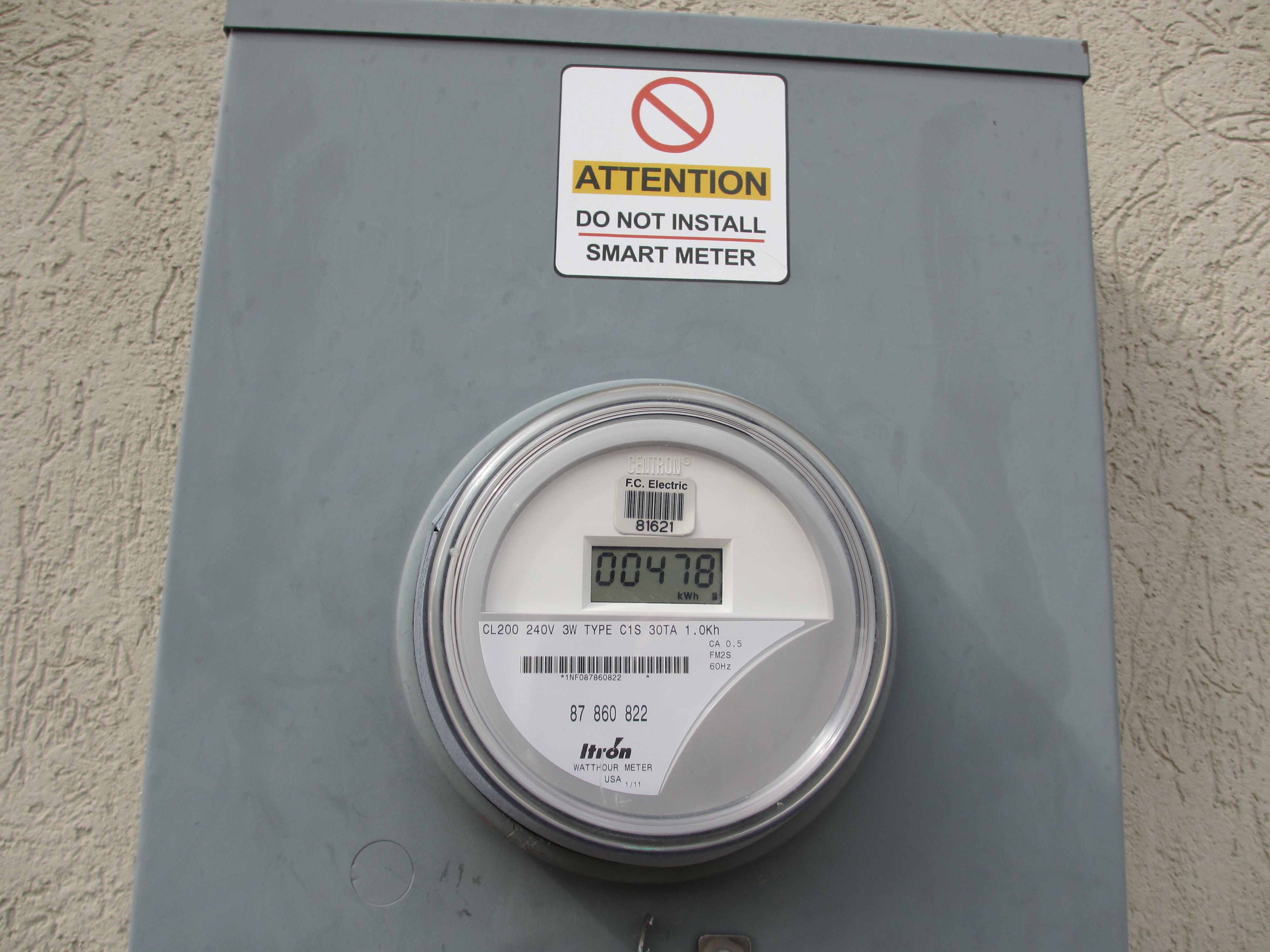 Salt in the wounds: the smart meter the city forced on the Farvers

The smart meter remains on the Farver’s home for now, partially shielded using a smart meter shield.  They have bought a true analog meter from Hialeah Meter, and are weighing their options at this time.   A number of Fort Collins residents who have had smart meters forced on them have also purchased analog meters, and together, plan on having them re-installed in the near future, in defiance of the City’s Orwellian agenda.

Because Craig Farver works for the City, the family is concerned that their activism around “smart”meters may result in him losing his job, though such a termination would be illegal under state employment law.

One thing is for certain.  The Farvers have suffered enough and do not deserve the wireless salt that Ft. Collins is rubbing in their still raw wounds from losing their son to out of control RF radiation.

We advise everyone to use the documents at freedomtaker.com, including the notice to police officers that enforcement of a civil matter on the side of the utility company is not legal and will not be tolerated.

Dennis Sumner- head of Ft. Collins smart grid program who personally forced a meter on the Farvers’ home, can be reached at (970) 221-6700 (ask for Dennis Sumner)  or e-mail him at dsumner@fcgov.com