NAPERVILLE, IL- The deployment of the “smart grid” took a dark turn on Wednesday in Illinois, as residents in the City of Naperville (CON) woke up to the reality of ‘smart’ meters forced on their homes by police officers and municipal utility installers working together to intimidate- and in two cases arrest- residents who continue to refuse the meters and protect their homes.  This follows CON’s FINAL NOTICE to residents days before.

These developments would be unbelievable in and of themselves as flagrant violations of constitutional property rights.  The fact that the meters emit a Class 2B carcinogen, have caused at least hundreds of fires, and clearly violate privacy laws including the 4th Amendment, not to mention that these facts are all at issue in an ongoing federal lawsuit brought against the city by its own residents- makes these events all the more troubling.

New details are emerging about the CON’s installation “blitzkrieg” – backed up by armed police- that hit neighborhoods in this Illinois city of 150,000 people starting on Wednesday January 23rd.  The forced installations have continued since then.

Residents told Stop Smart Meters! that the deployment happened very suddenly and unpredictably, using “shock and awe” tactics.  All of a sudden, the whole street was filled with police and installation vehicles. 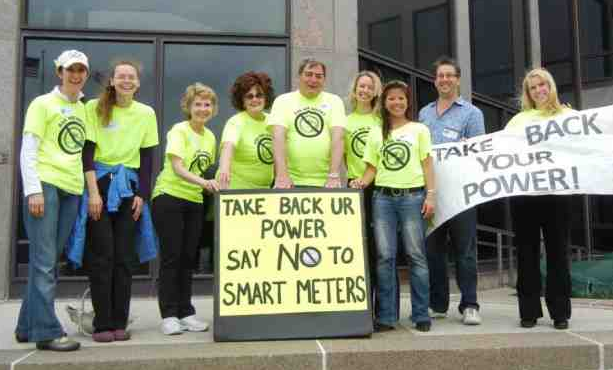 These UnAmerican Activities Must Be Stopped!  NSMA members rally in Naperville last year

Two mothers- both community leaders working with Naperville Smart Meter Awareness (NSMA)– Kim Bendis and Jennifer Stahl- were arrested simply for standing peacefully by Jennifer’s home in front of advancing officers and installers, telling them they did not have permission to install a smart meter on her property. Kim was arrested for trying to document this abuse of police force, an abuse further evidenced by the Naperville Police Department seizing her camera and SD chip.

Can’t have the world watching.

Luckily a Chicago CBS affiliate was there and caught the CON’s shameful acts on the evening news.   NSMA’s videos of the Naperville forced installs can be found at NSMA’s Youtube Channel.

Kim was charged with resisting arrest and “attempted eavesdropping” on officers.  Both charges are ludicrous, and the eavesdropping charge is particularly ironic and twisted as that is precisely what the smart meter is intended to do to individual households’ privacy.

The bully blaming the victim.

Jennifer was charged with interfering with an officer and violating Naperville city ordinance 8-1C-3:7 by blocking the meter. The two were released from police custody a couple of hours later. They both came home to find that smart meters had been installed on their homes.

The “attempted eavesdropping” charge is based on a controversial Illinois law that prohibits filming police officers in some circumstances.  Forced smart meter installations are probably precisely the kind of police activity that this kind of law is intended to hide.  It is being challenged by the Illinois ACLU and other civil liberty groups with some success.  More here.   Needless to say, the law is blatantly unconstitutional.

In the US, if you can be there, you can photograph or video.  The only exceptions to your right to photograph/video are on the premises of some US military sites, and the use of a high-power lens that intrudes on someone’s privacy. Trespassing is a separate issue, and you may be charged with it, or kicked off private property, but any photographs you took before being kicked off are legally yours.  Know your rights. You can download wallet sized “photographer’s rights guides” here: Side 1 and Side 2.

We spoke with Jennifer and Kim yesterday, and they tell SSM! that the fight is not over. Instead of drawing the controversy to a close- as the CON might have hoped, the forced installations have just renewed NSMA’s commitment to secure a no-fee analog opt out.  Their team of attorneys is working on this case from a number of angles and the Illinois ACLU is monitoring developments.   Widespread condemnation has rained down upon Naperville in the last few days, and the incident has amplified opposition to “smart” meters internationally.

Up to this point, for the most part- if a resident says “get off my property” generally installers are instructed to comply (with some exceptions including in TX where people have had to draw their guns when installers refuse to leave). Arrests that have taken place have generally been at installation yards or community blockades- not people defending their own homes.  A request to leave the property would usually suffice.

Now a line has been crossed in Naperville.

It’s not as if the crooks running PG&E or other utilities would not like to do the same thing as they are doing in Illinois.  It’s just that they realized that they risk a full-scale public revolt if they tried.  In December 2010, two (other) mothers were arrested in West Marin County for blocking smart grid installations, and one year later more than a dozen families took direct action and removed unwanted smart meters from their homes, returning them to a PG&E office in Santa Cruz County.  This sparked other protests and along with public, legal, and legislative pressure, forced a tentative analog opt out option for investor-owned utility customers in California.  The rebellion has now flared up in Illinois.

Utilities’ political power derives from the masses remaining obedient to an authority the companies and government institutions simply do not have.   As soon as there is resistance, that “authority” begins to crumble.  The CON might have achieved near 100% installation in Naperville, but it has come at a steep price.  This story is far from over. 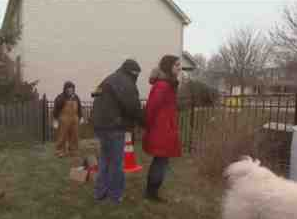 Has it really come to this?

Police arresting homeowners who refuse to allow a smart meter on their home is a direct violation of the 4th amendment guaranteeing freedom from unreasonable search and seizure.  Charging a fee or even disconnecting someone’s service is bad enough, but arresting you if you refuse to submit to a meter?  It’s preposterous.  Nevertheless, that is exactly what is happening.

One thing is certain.  Naperville officials have taken on some serious legal liability with their actions of the last few days.

The truth is that the Naperville City Council and City Manager have grown so fed up with the grassroots group NSMA, the fight has become so personal, the corruption that NSMA has dug up so deeply embarrassing to the city, that the CON is now using the police and installation personnel as proxies to exact revenge, using the weapon of forced microwave radiation and police intimidation.  Hundreds in Naperville have been threatened with arrest if they resist the forced installations, while Naperville Police threatened to shoot a man’s dog if he did not comply.

This is beyond criminal. Those involved should be indicted and imprisoned. Federal (and international) policies that have allowed this to happen are as unacceptable as the personal, dangerous obsession that must have infected this council to get them to believe that a reasonable course of action included arresting people for refusing to accept a new device on their home that they were never even consulted about.

The CON justifies its insistence on 100% resident compliance on Dept. of Energy contract obligations.   However, any contract that presupposes property owner consent for such an installation- without expressly obtaining that- is in itself, illegal, presumptuous, and faulty.

The smart grid’s deeply authoritarian roots have been laid bare for all to see in Naperville. Forced smart meter installations- backed by the threat of official violence must not be tolerated anywhere.   To the extent that President Obama (who is from Chicago, only 30 miles away), State or Federal elected officials choose to turn a blind eye- or even quietly support- what is happening in Naperville, then they are as guilty as the perpetrators of these crimes. Would Barack or Michelle want their kids forcibly exposed to carcinogenic radiation, the privacy of their home lives and routines revealed?  Would they want their home to be at greater risk of fire  You might want to ask Mr. Obama.

Even if you’re one of the people who don’t really think that smart meters are such a big deal (and that number is steadily decreasing as problems with the technology continue to surface) the question raised by events in Illinois is: where does it stop?  How far will police and corporate interests go in violating your property- not to mention human- rights?  What happens when your city decides to install wireless water meters, often located inside the home? Will Police knock down your door and enter (without a warrant) to force installation of a meter?  What else might they decide to force into our homes?

A comment on a smart meter bulletin board this week in response to the Naperville events:

“Especially in North America, corporate rule has now replaced what we thought of as ‘government’… the police, the city, everything.  No such thing as government any longer – literally.  It is, quite simply, all just commerce to these merchants.”

On Monday, we might have thought they were going a bit far.  At the end of this week, we’re not so sure any more.

Stop Smart Meters! stands in solidarity with Jennifer and Kim and all who are resisting Naperville’s illegal actions at this traumatic time.  You are the Rosa Parks’ of the 21st Century.  Please donate to NSMA’s mounting legal expenses.  If we don’t stick together and stop this in Naperville, where will it stop?  Now is the time to organize locally, wherever you live.

1) Demand that politicians stand against tyranny and stop the CON.  Demand that the media do their job and report on the arrests accurately as well as on mounting problems with the smart grid: Download the Public & Social Accountability Campaign Guide for Naperville, IL

“The truth is incontrovertible, malice may attack it, ignorance may deride it, but in the end; there it is.” ~Winston Churchill