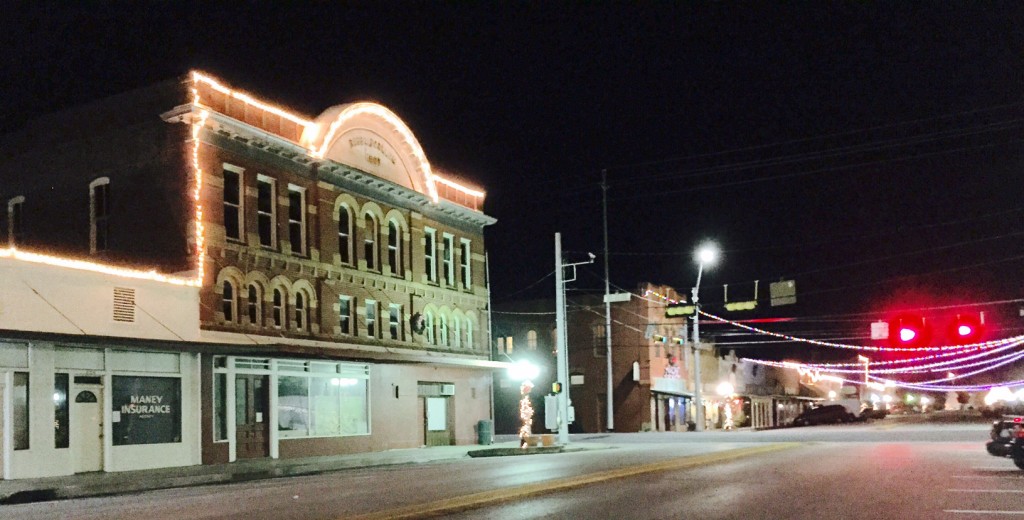 SMITHVILLE, TX— Smithville is a small town of about 3800 residents in central Texas, about 40 miles southeast of Austin and about 100 miles northeast of San Antonio. It’s not just the town’s name – even residents say Smithville is a fairly ordinary small town and typical of “middle America” with a Main St. where everyone knows each another.  A community meeting there last November that presented information about smart meters ignited debate and participation, galvanized the town to action, and generally shook politics up in a good way, according to residents.

Some background: About a year ago, the Smithville city council signed a “revenue neutral” contract with energy company Ameresco to replace all the analog water and electric meters in town with “smart” wireless meters and install LED streetlights (which have their own set of problems). Residents were informed of an “infrastructure upgrade” but few were aware of the implications and potential problems.

Jim Keller, a photographer and property owner in Smithville, and Kelly Holt, an investigative journalist running for the Smithville City Council, were aware of these problems and knew they had to act in order to bring critical information about the risks to the town’s attention.  Acting on an ad hoc, independent basis, the two organized a community meeting to discuss the smart meter issue, and brought in experts. Jim Keller tells us that prior to the meeting, “I don’t think city staff or the meter manufacturers ever expected a backlash here in Smithville.”

Keller and Holt sent a mailer out to 2174 households in town on October 31st (using USPS Every Door Direct Mail) with facts about security and fire risks, inviting everyone to a community meeting to discuss smart meters on November 5th. They hoped a few people would turn out to have a discussion, but were not prepared for the response.

Neither were the city council nor Ameresco, who had simply considered the metering/ streetlight projects a mundane and routine “infrastructure upgrade.”

On the evening of November 5th 2015, more than 110 residents packed into an old school auditorium in the center of Smithville. The crowd included 4 of 5 city council members and 2 officials from Ameresco. Many were taken aback by the size of the crowd, including one of Ameresco’s staff who was reportedly appeared to be in shock at the number of people gathered to hear about the problems with the company’s products.

Speakers at the event included Sheila Hemphill of Texans Against Smart Meters and Laura Pressley of Austin Smart Meters.

No mention was made of the health effects of microwaves in the mailer, but the audience was passionately interested and the presenters delivered detailed information on current medical research and EMF exposure guidelines as they relate to the safety of exposure to smart meters. When moderator Jim Keller notified Sheila Hemphill that her time was up, a person in the audience yelled, “let her speak!” People were riveted to the presentations and hungry for more information on the topic. Several people shared specific concerns about health impacts from wireless technologies, including the interference problems with pacemakers. 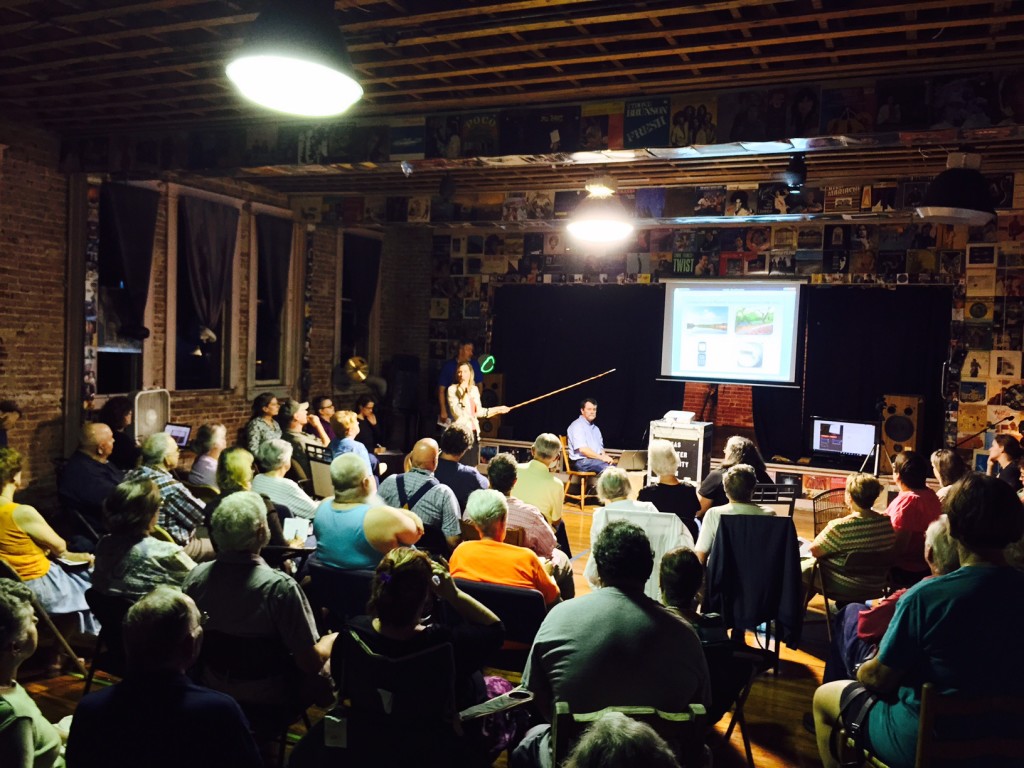 Kelly Holt reported on what happened at the meeting in an article she wrote for the New American on the smart meter debate in Smithville:

“…many attendees didn’t wait for the presentations to begin before shouting questions to anyone listening — the highly charged assembly became an unintended forum for residents voicing their anger that such an important, and expensive, decision had been made without any resident input or proper vetting of problems inherent with the devices. The gathering degenerated to a showdown when one council member who was present heatedly defended the council’s decision, but too little, too late — folks were angry.  One resident described the meeting as “almost an insurrection…“

The meeting on November 5th ignited a debate in town that has continued to this day. Six weeks after the game changing Smithville smart meter summit, the city council acted to approve an “opt out” policy for analog electricity meters that (like PG&E’s “opt out” program) charges residents $75 initially and $10/ month.  Though many residents continue to demand that the program itself be halted and that the fee be abolished, smart meter installation is proceeding in Smithville with the “opt out” program in place (though water meters are not included at this point).

Kelly Holt told SSM! that although some choice is better than no choice, the opt out fee remains a barrier to many, though the city does offer an adjusted fee for those on low income. Despite that, she tells us that “after the meeting there is a new awareness in town about the hazards of smart meters.”

One thing is clear.  Such increasing awareness, and pressure for officials to act, is spreading precisely through grassroots efforts such as the DIY community meeting organized by Smithville residents themselves.  Link up with others and get involved in your community today!

………………………………………
Editor’s Note: Analog meter choice bills are being considered by a number of state legislatures this year, in response to a drumbeat of public complaints.  These states include: Missouri, Michigan, Maryland, Massachusetts, Ohio, Pennsylvania, and Texas. For a guide to smart meter policies throughout North America, courtesy of BC’s Coalition to Stop Smart Meters, click here.

Because smart meter radiation fails to respect property boundaries, an “opt out” policy is no real choice when living in a neighborhood filled with pulsing meters and associated infrastructure. The smart grid problem is systemic and an “opt out” policy is a band aid on a gaping wound. We continue to demand an across the board safety recall and an independent investigation.

Utilities had hoped to contain knowledge about smart meter hazards (and ensuing public resistance) to California, Maine, and other states who rebelled early against the smart grid. The fact that there has been such an overwhelming response in places like Smithville, and in Texas as a whole, should serve as a wake up call to the authorities that forcing smart meters on people will not be tolerated anywhere.

Smithville’s smart grid political awakening contains lessons for US energy policy, and for community activists and groups standing up against the “smart grid” everywhere. We go into more detail below.

Lessons from Smithville for Community Organizers:

•  Outreach does not have to be complicated- or expensive. Kelly and Jim made a short list of issues relating to smart meters with links to the most unimpeachable and non-partisan internet sources, such as the Government Accountability Office (GAO), which they felt would be of most interest to the community, and sent this out in a simple mailer to the town that included an invitation to a community meeting. This cost about $300 for postage, $400 for printing, and the meeting space was donated. Twenty people paying $35 each can cover that kind of expense.   Yes it’s a small town with only about 2000 households, and a larger city would cost more, but starting somewhere and focusing on a neighborhood that may be more open to your message as a potential “smart meter free zone” is a good strategy. EDDM, or “Every Door Direct Mail” service from the post office can save money on postage to entire zip codes and facilitates widespread delivery, but requires time and advance planning from your group.

•  If your local city council or regulatory body doesn’t hold a hearing, hold one yourself!  Hold a community meeting yourself at a local school, library, vets hall, or the like. Often these are cheap or free places to hold group meetings. Invite experts in the field, and invite utility representatives to debate them. Don’t give up your right to have debate, discussion, and form independent political objectives. If the people lead, the leaders will follow. Attend city council meetings and speak out frequently, referencing the facts. In the run up to an election, incumbents are particularly sensitive to public opinion.

•  Sometimes a simple action or set of actions by an individual or set of individuals can spark a larger movement. Jim told us: “The fact is that it was not as much a ‘calculated effort’ on our part – we called the meeting just to see what people thought about it prior to the upcoming city council meeting, and were frankly surprised by how big an issue it was without us making it one.  After that point, it took on a life of it’s own – it didn’t need ‘selling’ or ‘tailoring the issue to the local politics’.  What the takeaway is here is – there is no cookbook approach to getting the results we did. Each area has it’s own social and political character.”

•  Check out our international guide to smart meter groups.  Often these groups will have speakers who are willing to travel to your area.  Contact us for recommendations and ideas on getting the most out of your event.  Sufficient advance publicity, and a good moderator and speaker- are all key.

StopSmartMeters.org is available for consultations with your group on how to handle media, campaign strategy, understanding EMF’s and the science, organizing events, reaching out to politicians, and other topics. Please donate or shop our online store to support Stop Smart Meters!