Sensitive and Inside Big Technology: Views from the Other Side (Part Three)

Part three of a series. Click for Part One, Part Two, Part Four and  Part Five,

‘Jenny Liu’ is in her early thirties and has worked in the software industry on the East Coast for about a decade. Wireless radiation has been a part of her work environment in one form or another for all of that time. 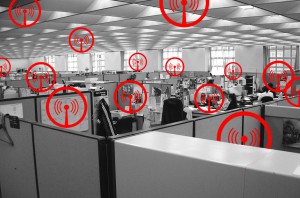 Now she is electrically sensitive, and that illness determines where and how she works and lives. Her work involves technical writing, software testing, and customer support. She has been very methodical and analytical in assessing her illness and her situation, and she hopes she can offer some help for others who have been sensitized.

Although she associates her illness developing while working at an office near a cell phone mast, she has learned so much about the other types of electro-magnetic and intermediate-frequency fields that we are all routinely exposed to, that now she feels it is important to assess and consider these other sources of exposure. She uses several different meters to measure and monitor what she is exposed to.

How does she deal with this in work situations? “Some people are sympathetic, and some are not. You have to make the best of each situation. For example, even when wired connections are available, some people will still demand WiFi for their gadgets. If removing WiFi is unacceptable, then you can try to get it repositioned. If you have any flexibility to change desks, then try to sit away from WiFi routers, and away from coworkers who heavily use wireless. That’s what I’ve done.” That is a lot of work to do before you are able to do your work.

But it sounds like it hasn’t all been uphill for her. “At small meetings, sometimes one supportive coworker will take it upon himself to remind others to turn off their WiFi for me. It’s much easier than speaking for oneself.”

“At large meetings, sometimes you just have to step out of the meeting sometimes, or join remotely. It’s easier, of course, to make a request at the beginning of a meeting if you yourself are running the meeting! It’s also easier to make requests if you are the manager.  I did a little bit of management at one point.”

“If you can’t get a tolerable situation at work, then you have to start thinking about working from home and telecommuting, if possible, or else switching careers….”

Traveling raises a whole new set of issues. “I’ve spent hours and hours choosing my hotels, guessing which ones had less wireless, with no certainty about cell towers etc. until I got there. Sometimes I would still have to request room changes, and use my shielding fabric, if the levels were low enough to be shielded.  As a customer of the hotel, you can usually request changes.  Sometimes I’ll walk around the hotel and request a specific room further from the WiFi access points.”

“However, when you’re visiting a customer for business, you’re not in a position to ask for changes. People are increasingly bringing smartphones to meetings. In the last few years, I’ve decided to cut down drastically my traveling, and let my coworkers handle it instead.”

“In the beginning of my electromagnetic sensitivity, I only knew about wireless radiation and magnetic fields, the two forms of EMF’s that are now both classified as class 2B carcinogens by the World Health Organization. I had developed symptoms in less than a year of working within about 250 meters of a mobile phone mast, a distance found by studies to be correlated with health symptoms. My symptoms occurred at levels far below international safety standards, which only protect against the thermal effects of microwave radiation.  In contrast, three science-based precautionary guidelines made in the last decade—the Salzburg Resolution, the Bioinitiative Working Group recommendation, and the Seletun Scientific Statement—all call for levels well below international safety standards, for protection against nonthermal effects.”

“After being sufficiently damaged by wireless radiation, I started getting a distinct ear pain when certain wireless sources were transmitting near me, even when I had no clue that there was a source near me.  Time and again, after feeling such pain, I would pull out my detector, find the source, and then remediate the problem to end my symptoms.”

“Though I had many other classic electrosensitivity symptoms in the presence of wireless technology, such as headaches and heart signal interruptions, the ear pain was one of the most distinct and obvious symptoms, because I had never experienced such symptoms before in my memory, prior to developing electromagnetic sensitivity.”

“For many years, I did personal research on wireless radiation to learn how to protect myself from it and learn how to explain to others that electrosensitivity (ES) was a medical, physical problem, and not a psychological disorder. The shielding materials I found allowed me to travel in cars near cell towers, and even to travel abroad, and cope with EMF’s in hotels from cell towers and WiFi.”

As she came to learn more about the various types of fields in our environment, she made different modifications. “All this time, however, I knew little about the health effects of electric fields and intermediate frequencies (kHz radio-frequencies).  What got me thinking beyond microwaves and magnetic fields, was a body voltage meter. I had a Eureka moment when the places where the body voltage meter read high were places where I still felt strange ES-like symptoms in my head or ear, despite the fact that I had already remediated my environment for microwaves and magnetic fields.”

“I then contacted a building biologist and learned how to find which circuit breakers to turn off.  After turning off the circuit breakers to the energized wiring immediately below my floor, I could use larger areas of my room, and no longer had the ‘sour ear’ feeling which I occasionally had from sleeping on my mattress on the floor near the hidden wiring.”

“The building biologist also introduced to me yet a fourth type of EMF’s—radio-frequencies emitted by certain forms of electronics. I learned about a simple tool to detect it—an AM radio. My ears had only recently started to react to my LCD flat panel monitor, and now I understood that this could be related to the radio-frequencies of the CCFL-backlighting in the screen.”

“Since modifying my computer environment to protect against exposure to all 4 types of EMF’s, I have been able to continue using computers, at a greater distance, for longer periods each day.  I have also remediated many other sources of intermediate frequencies, such as a plasma TV and dimmer switches, things that I hadn’t realized could exacerbate my symptoms. Perhaps these other EMF’s even contributed, along with the cell tower, to my electrosensitivity in the first place!”

What does Jenny think about the electro-sensitivity that ‘smart’ meters have induced in some people? “To those who are faced with smart meters—which are much stronger in microwave radiation than the cell towers which affected me, and possibly also a significant source of intermediate radio-frequencies—my advice is: don’t risk your health. Permanent damage can occur in less than a year. You will then have restricted options as to where to work and live.”

“Not only may you develop intolerance in the presence of common wireless devices that are increasing every year, many of which are worse than their predecessors, but you may also develop intolerance for radio-frequencies from everyday electronics and electricity itself. You will then find yourself increasingly isolated socially from our technology-mad society, which remains largely in denial of the potential health effects, despite overwhelming scientific evidence to the contrary, and increasing government health advisories for precautions worldwide.”

Jenny Liu has gone to great lengths to recover her ability to work in the tech industry, and although many people may be able to learn from her experience, we don’t believe anyone should be forced to resort to such elaborate measures. The damage done to some people by the installation of a ‘smart’ meter on their home may be irreparable, causing years of harm.

Jenny recommends this website for a information and advice on managing electrical sensitivity: http://emfwise.com

3 Responses to Sensitive and Inside Big Technology: Views from the Other Side (Part Three)