Sensitive and Inside Big Technology: Views from the Other Side (Part Four)

Part Four of a series. Click here for Part One, Part Two, and Part Three.

‘Marc Handke’ has been designing software for over ten years. He has been dealing with wireless sensitivity for about the last four years, and installation of ‘smart’ meters in his neighborhood has been a serious blow to managing his condition. 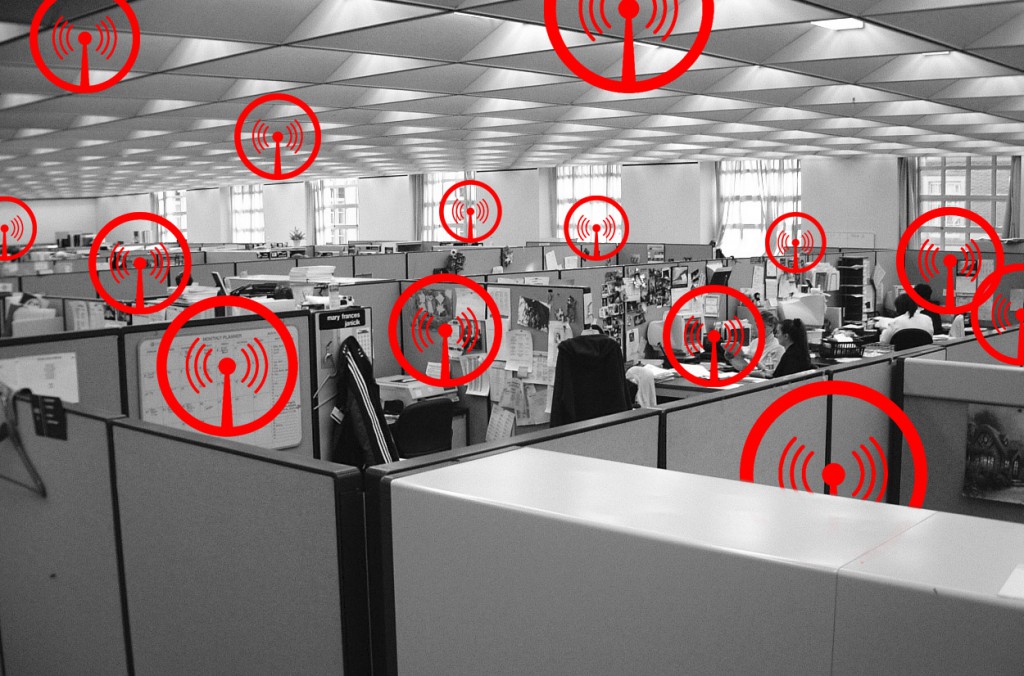 “To be honest, I was against ‘smart’ meters, but not really concerned about the immediate health effects. I figured it would be similar to my neighbor using a cell phone inside their home, and I wouldn’t feel anything. I was wrong.” This is hardly surprising, as a ‘smart’ meter is a much more powerful radio-frequency transmitter–an FCC-rule-busting 2.5 watts with antenna gain (PG&E)–way more than a cell phone, which typically transmits at under 1 watt.

Marc lives in a Silicon Valley county, and is in his late thirties. Before getting sick, he was an active surfer and did his own yard work at his family’s mountain home. That home’s distance from any cable or broadband connections led him into making a terrible mistake: signing up for rural internet service via a wireless provider that broadcast from 16 miles away—a service which necessitated the installation of receiving and transmitting antennas—right on top of on his own roof. He also agreed to install a repeater antenna to help improve a neighbor’s reception, adding to the RF transmissions he was exposed to.

He has no idea just how strong the fields produced by these multiple antennas was. However, health effects are documented to occur in people living within hundreds of meters of antenna arrays, so it seems unlikely that living directly under antennas–even if lower in power than the towers studied–could be without serious consequences, at least for some people. [Here is a link to one study on health damage from cell towers, and another one, and another one.]

His energy took a nosedive. “I was tired all day, drinking coffee to compensate. I couldn’t concentrate for even one hour.” In this depleted state, his health took another blow: “I also contracted lyme disease at that time. While I was being treated, I noticed that I immediately felt very ill every time I returned to my own home.”

“My doctor finally suggested I should consider the electronics and wireless devices. I had never considered that before.” He took action, removing all the wireless devices in his environment. Fortunately cable internet service finally came in his area about this time. He began to feel better.

A short stint in a Midwestern state, where he got treatment for his lyme disease, helped his health return. “I was running five miles a day. My concentration levels were coming back, and I was starting to feel human again—finally!” But by now he had begun to track how time spent around wireless devices triggered headaches and what he calls “spacey” sensations.

So when he moved back to a densely populated neighborhood of a Silicon Valley town, he took the trouble to buy a device to measure the radio-frequency radiation and to choose a house with very low levels. “There was very bad cell-phone reception—and that was great for me!” He felt better with each passing month—his health returning to somewhere near the robust level he had experienced four years before.

Then ‘smart’ meters came to his neighborhood. “I was on the delay list, but many of my neighbors weren’t. Others, like my next-door neighbor, just hadn’t called yet, and got a ‘smart’ meter installed while they weren’t home.” Slowly, the neighborhood was saturated. “I didn’t know the neighbors behind me had them—but I had sleep problems from the day they were installed.”

“I don’t know why exactly, but ‘smart’ meters really bother me. I have never had sleep problems in my entire life, but now I sleep only five or six hours per night, when I used to sleep eight hours without disruption. I have a constant wiry feeling in my chest, yet I am always fatigued, and do not feel able to exercise much. When I do exercise, I tire very quickly. There is no way I could run five miles per day now. Also I’m not able to concentrate as sharply as I used to.”

Marc is president of an internet company he currently runs, and he designed all the software for its operations. He’s proud of his accomplishments, and even prouder of his young child. He is a man for whom the future should be beckoning, replete with excellent prospects. But he is having to reckon with the need to find a new place for himself and his family to move to.

“It is heartbreaking that our fairly pristine town is now completely saturated with the ‘smart’ meter mesh network. I am looking to move to a rural area without cell towers, and with distance from my neighbors.”

What do his peers in the field think of his sensitivity? “To be honest, many of my techie friends probably think I am crazy. I would have thought I was crazy too, five years ago. But once you become sensitive to wireless devices, you realize that the symptoms are all too real.”

“They can’t believe I run a software company without any wireless devices or a cell phone. All my employees work from home, as I do, and we are all connected through VOIP [voice over internet protocol] so we can talk to each other. All our computers are networked through VPN tunnels [virtual private network].” Everything, even the telephone, in Marc’s house is fully wired, giving his computer a faster and more secure connection speed. “I use a cell phone only for emergencies away from home.”

Marc is able to manage his condition for now, but the bigger picture disturbs him. “I am very concerned that more people will start having these same health problems as our world becomes more saturated with wireless signals—and there is no telling if the condition is permanent or not. Unfortunately, it may take hundreds of thousands of people getting sick before the condition is fully recognized by the mainstream. I wouldn’t wish this condition on anyone, but I do hope people can begin to understand that wireless devices do cause health problems for some people.”

Becoming a father has made him more alert to the dangers that wireless poses for children in particular. “I feel real concern when I see parents letting children use iPhones as toys, or to play lullabies for their babies. I know families who leave the WiFi on 24/7, or place a baby monitor directly next to their child’s bed. Children can’t communicate their symptoms. Their future health could be seriously impacted. There is not enough caution about protecting them. I don’t think these are neglectful parents, but like most people, they have no idea that wireless has many biological effects.”

The introduction of the PG&E mesh network in Marc’s town has been meant his home, the refuge he counts on, has been violated. “‘Smart’ meters are driving people out of their homes. For people who are sensitive to wireless radiation, your home is your haven—where you can go to feel safe and get some relief from the toxins of the world. Now ‘smart’ meters are saturating our homes and neighborhoods, so that one last haven is being taken from us. This is a horrific tragedy, and I hope we can find a way to reverse this wireless ‘smart’ meter program.”

4 Responses to Sensitive and Inside Big Technology: Views from the Other Side (Part Four)