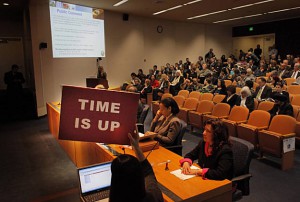 Note: We've had a request to remove the previous photo that depicted Mr. Peevey as Pinocchio, due to the fact that the president of the CPUC apparently suffered from cancer of the nose. We'd like to point out that our removal of this photos demonstrates far more respect than Mr. Peevey has ever shown- through his policies- to victims of the smart grid, including cancer victims. -Ed.

We have been saying all along that this forced deployment of dangerous “smart” meters is illegal, and that the recent proposed “opt-out” put forward by CPUC President Michael Peevey is extortionate—here is a detailed analysis of just how far away President Peevey steps from what he and his commission are actually allowed by Federal law and Public Utilities Code to do. Peevey uses laws that should in fact protect consumers and allow them choices–instead twisting them to protect the interests of profiteering utility corporations.

The analysis comes to us from Steve Martinot (of Alameda County Residents Concerned About Smart Meters (ACRCASM)),  who has been involved as a protestant in the CPUC’s opt-out legal proceedings since the beginning. We at Stop Smart Meters! are not legal experts, but we think Steve has done a good job of being a citizen-lawyer, and simply reading with care the CPUC code and the Federal law in question with care. Here is Peevey’s 47-page decision.

You may be aware that the opt-out proposal is extortionate. And you may also be aware that there is no legislation that directly mandates installation of smart meters. But in CPUC President Peevey’s proposed decision, issued Nov. 20, 2011, he actually warps the law to make it look as if there is.

There are three levels to this issue: the policy level of time-variant pricing; the infrastructure that will make this mode of pricing available to people (available, not mandatory); and the technology which will constitute this infrastructure, of which smart meters are a part–the part that impacts people.

“To ensure that the electric noncommunicating meter [the type of digital non-RF meter proposed for opting out] is able to take advantage of smart grid benefits in the future, it must be capable of capturing interval energy consumption data,” that is, time-of-day data.

This is his argument; this is why he has chosen a digital non-transmitting meter for opt-out, and why he rejects leaving analog meters in place or replacing them. (Ultimately, those of us fighting these devices know, it is the billions of dollars involved in the technology, the construction, the profitability, the enhanced corporate earnings, that are the real reasons for all this, “why” he is doing it. But here I am dealing with his logic, as he presents it, because that is one of the fields we have available to us to confront him.)

Peevey says: “The single most important reason to transition from analog meters” is to support ‘price responsive tariffs.’” This is also known as time-variant pricing, or Time-Of-Use (TOU) pricing. Digital meters, ‘smart’ or not, are necessary to implement this type of pricing.

“We do not find the analog meter option reasonable [because it cannot] track interval energy consumption data.” The important point here that he conveniently leaves out is the use of “tracking interval data” must be left voluntary for the customer. (See below for the relevant law.) This is a serious twisting of the truth. He is lying by omission.

He goes on. “We find the appropriate opt-out option to be … a SmartMeter with the radio-off.” Here he is stating his installation mandate. It is contained in his insistence on an opt-out option. An opt-out option can be proposed as an exemption or exception only in the context of a mandated uniformity (of installation).

Why is all this important? Because the law states that time-variant pricing must eventually be made available. But Peevey is turning that law into a statement of mandate that the infrastructure must be in place in order to satisfy the legislative directive that the policy (time-variant pricing) be made available, that is offered, to those who want it.

The policy is to be voluntary, but the infrastructure is to be mandated in order to provide for that voluntary availability. He shifts “must be available” (the policy) to something else, namely, “must be capable” (the infrastructure). It is in that warping of logic that he can pretend to an installation mandate.

This point is vitally important because it implies, in my reading of the law, that every non-consensually installed smart meter is in violation of this law, the very law that Peevey uses to ground his idea of an installation mandate.

Let me repeat: Peevey is saying that in order to be able to offer time-variant pricing, the infrastructure (smart meters) “must be” in place. It is by that slight of hand that he is transforming what is left voluntary in the law into a mandate in practice.

And he is dead wrong. The law provides for the opposite. The customer must have the ability to refuse the technology (smart meters) precisely because the policy (time-variant pricing) is refusable.

The law he cites is the Public Utility Code 745, which he mentions in a footnote to an odd statement in his proposed decision. He says, time-variant capability “must be available by January 1, 2014.” 2014 is a deadline for him. And his footnote says: “Pursuant to Pub. Util. Code § 745(b)(2) an electrical corporation may employ mandatory or default time-variant pricing, without bill protection, for residential customers after January 1, 2014.”

It sounds like he is using the law to mandate the installation of smart meters or time-variant meters in order to have them all ready for January 1, 2014, doesn’t it?

Here’s what section (b) of article 745 actually says:

Read it again. Don’t be fazed by the legal terminology. It really means what it says. The actual words of the law are: “shall not require or permit … any of the following.” It does not say “may employ,” as Peevey paraphrases it. That is a complete reversal of the law’s stated meaning.

In other words, Peevey’s motivational argument for not affirming analog meters given above is purely invented, and has no basis in law. That is, it has no basis in law other than his own misquoting, or purposeful truncation in his law citation, a truncation that actually turns the meaning of the law into its opposite.

Peevey is operating as if the law says the opposite of what it actually does say. “The commission shall not require or permit … time-variant pricing …” But forcing the installation of a smart meter is a way of permitting time-variant pricing in practice. No permits need be issued because the smart meter itself is the permit. And as such, it is in violation of section 745(b).

Well, what happens after January 1, 2014? We get that in section (d). This law is not in any way obsolete; this version of the Public Utilities Act was passed in January of 2011.

Okay, let’s take a close look. Subsection (1) says: “Residential customers have the option to not receive service pursuant to time-variant pricing and incur no additional charges as a result of the exercise of that option.”

So Peevey’s argument against leaving analog meters in place, or replacing them, is false.

After January 1, 2014, the customer can opt out of time-variant pricing, then the customer has no need of technology capable of it, and so, an analog meter will suffice, Peevey’s desires notwithstanding.

And before January 1, 2014, we cannot be required to accept time-variant pricing before, so we can refuse the technology capable of it during that time as well.

Under Peevey’s own logic that the technology is intimately connected to time-variant pricing, refusing the latter implicitly means the refusability of the former, under the same conditions (no additional charges).

When Peevey says, “To ensure that the electric noncommunicating meter is able to take advantage of smart grid benefits in the future, it must be capable of capturing interval energy consumption data,” he has done something he has no business doing—taking upon himself the necessity of “ensuring” anything with respect to “smart grid benefits.”

Indeed, there is a flexibility in the law that the PUC has ignored. Not only can there be no charges or administrative fees for refusing time-variant billing, and presumably its infrastructure, in the event that a customer wants to see if it works, that customer gets two years to try it out. It is on consignment. And there are medical baseline allowances. Nothing is mandatory here for the customer.

What does section (c) say? It says:

(c) The commission may, at any time, authorize an electrical
corporation to offer residential customers the option of receiving
service pursuant to time-variant pricing and to participate in other
demand response programs.

This section is saying that the utility can only offer this service. It is up to the customer to want it, that is, to opt in. According to this law, there is no necessity to opt out. Until January 1, 2014, there is only the option to opt in. Period. If a customer wants to use time-variant pricing, then they get the technology that allows them to do so (a smart meter). And if they don’t want to use that, they don’t need the technology to do so.

This is in accordance with the Federal Energy Act of 2005, which mandated that utilities had to offer AMI technology to those customers who might want it. And that was as far as federal law went. Neither it, nor state law, have mandated that any customer must accept this new AMI technology.

But that has been the problem we have been confronting all along, isn’t it? The PUC has been misreading the law, turning it around so that it means the opposite of what it says, and then using it against the people of California.

(1) “Bill protection” means that customers on mandatory or default
time-variant pricing will be guaranteed that the total amount paid
for electric service shall not exceed the amount that would have been
due under the customer’s previous rate schedule.

Bill protection simply means that with time-variant pricing, your total bill will be the same as previously. Between Jan 1, 2013 and Jan 1, 2014, the utility cannot require or permit time-variant pricing without this guarantee. A customer can opt in before or during that period, but that is up to the customer.

Every smart meter installed without the permission of the property owner up to today is not only prima facie evidence of trespass because installed in violation of PG&E’s (and other utility’s) easement. But it is in violation of this article 745 of the Public Utilities Act because, according to section (c), participation in the program must be voluntary. That means the will of the customer has to be canvassed.

For the PUC to have authorized the installation of smart meters without consent is in direct violation of the Public Utilities Act of California. Anyone in the PUC who has authorized or legitimized such consent-less installation is thus guilty of directly advocated violating this law.

Steve Martinot (martinot4 [at] gmail.com) has been a machinist, truck driver, university lecturer, union organizer, underground newspaper editor, poet, writer, among other things. Currently the group he works with on this issue is the Alameda County Residents Concerned About Smartmeters (ACRCASM).

9 Responses to Smart Meters Are Illegal: A Nitty-Gritty Analysis of Peevey’s Unlawful and Unfair “Opt-Out” Proposal