Yesterday the California PUC voted unanimously: PG&E customers who want to keep or restore a safe analog meter on their house will now be required to pay hundreds of dollars, and these arbitrary fees could increase later. 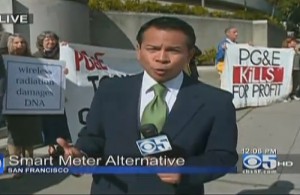 The CPUC appears to have been under pressure from the Obama administration and smart grid companies; President Peevey bragged of having had the gushing approval of a recent visiting Administration official regarding the California smart-meter “deployment.”

Strong, clear, and diverse voices have been speaking against smart meters for a number of reasons—many testifying personally to the harm they do—at each and every one of the CPUC’s public meetings for almost two years. Tens of thousands of complaints have been filed with the commission. They receive daily phone calls, emails, and letters, a steady stream of public objection. Experts from many areas have filed their own particular objections. 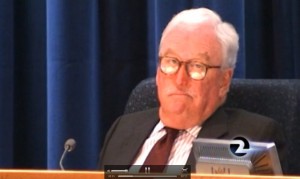 President Peevey, your conscience is showing.  (Click for KTVU coverage.)

To whom do they answer, these august public servants of the citizens of California?  To the utilities, to industry, and, it would also seem, to the Federal Government.

This decision flies in the face of the 70+ speakers who turned out at the meeting to oppose any fees, and to describe their symptoms, and the symptoms of those too sickened to travel to the meeting in San Francisco. The American Academy of Environmental Medicine told the CPUC in a letter last week that, based on the latest medical research, the smart-meter program should be scrapped entirely. The Santa Cruz Public Health Department produced a report that stated that smart-meter mesh networks pose serious risks to public health–and that existing state and federal regulatory agencies are failing to ensure public safety.

When some electrosensitive individuals in the audience during the meeting began suffering ear pain and headaches from the numerous smart phones and Ipads in the audience, Stop Smart Meters! Director Josh Hart stood up and asked people—mainly from industry and media—to have some respect and turn off their wireless devices. Many did.

Response to the CPUC’s vote was immediate and scathing. The crowd of anti-smart-meter activists began chanting and yelling out “Shame!” as soon as the vote was finalized. Others chanted “Class Action Lawsuit!”

Refuse to pay their protection racket smart meter radiation extortion scheme. Our health, privacy, and safety are not for sale.