More Families Getting Water Shut Off, But Utilities Lack the Legal Right 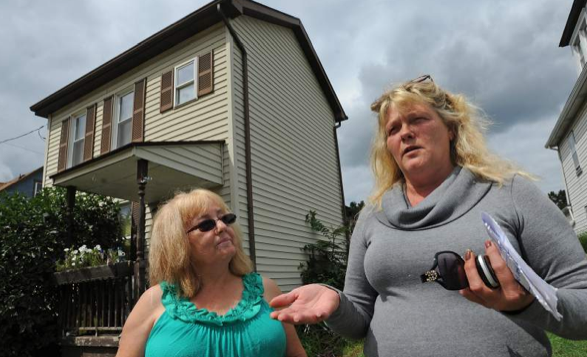 SPRINGDAME, PA– For the first time since Aug. 30, Cindee Zlacki of Springdale and her seven kids could shower at their own house on Tuesday.

An Allegheny County Court judge has ordered the borough to restore water to the family’s Railroad Street residence while the Zlackis and borough officials work toward a resolution over Springdale’s mandated “smart meter” system.

The borough began installing digital readers two years ago in its 1,750 residences in place of traditional water meters. The smart meters submit monthly consumption data to a centralized system via radio frequencies.

The meters record in minutes what used to take days and save Springdale taxpayers thousands of dollars in labor costs each year, according to John Molnar, borough street and water chairman.

Yet some residents, like Zlacki, ignored the mandated installation, fearing that the radio frequency emissions pose potential health risks.

With two epileptic sons and a husband with emphysema, Zlacki was among the six Springdale residents who on Aug. 30 had their water shut off for refusing to comply with the borough’s system.

John Zagari, the Springdale woman’s Pittsburgh-based attorney, successfully filed an injunction in county court on Tuesday to have the family’s water restored.

He claims that the borough is violating her right of due process.

“If you want to act as a monopolistic power in this country, you need to provide your citizens with viable alternatives,” he said. “I’m not saying you can’t implement a cost-saving program, but to force it upon everyone without exception is unconstitutional.”

On Tuesday, Allegheny County Judge Alan Hertzberg gave Zagari and Springdale Solicitor Steve Yakopec until Sept. 18 to resolve Zlacki’s situation or it will go to trial.

Zagari hopes an agreement can be reached, but Yakopec expresses doubt.

“I don’t know how this is going to be resolved,” Yakopec said. “If I knew of a solution beyond (Zlacki) complying, it would be done already.”

Zagari said his client would be content with paying a monthly surcharge to retain the traditional water meters and have borough workers check the numbers at her meter.

Molnar said that option is off the table, fearing that her exemption would set precedent for anyone to have their smart meters removed.

“It’s a difficult situation,” he said. “I understand where she’s coming from, but we don’t want to give anyone preferential treatment.

“I wish she would look at the research and realize there are no real health concerns.”

The smart meters and recording technology used by the borough are products of Sensus, which calls itself a global utility infrastructure systems company.

With the typical meter transmitting less than one second per day (distributed into up to 190,000 bursts -ssm), the Sensus products comply with Federal Communications Commission and Environmental Protection Agency safety regulations.

The California Council on Science and Technology concluded in 2010 that “the FCC standard provides a currently accepted factor of safety against known thermally induced health impacts of smart meters and other electronic devices in the same range of (radio frequency) emissions.

(WHAT ABOUT NON-THERMAL IMPACTS????)

“Exposure levels from smart meters are well below the thresholds for such effects.”

But a 2009 report from the New York-based Institute for Health and the Environment concluded that the health risks associated with wireless technologies like smart meters are widely unknown and could be more damaging than some studies indicate.

The report goes on to state that the unchecked and expanding development of wireless technologies like smart meters could lead to an epidemic of potentially fatal afflictions, including some brain cancers.

Zlacki said she is most concerned about the potential effects the smart meters’ radio frequency emissions will have on her two epileptic sons. She fears the emissions will cause muscle spasms and subsequent seizures, particularly with one who spent 153 days in Children’s Hospital of Pittsburgh last year because of a series of seizures.

Should the situation go to trial, Zagari is confident the court will rule in his client’s favor. He says judges in five other states have ruled against the municipality in similar cases.

“It’s a common sense thing,” he said. “Simple as that. The borough thinks they can do whatever they want, and they’re wrong.”

“Yeah, let’s all stop everything because someone on Railroad Street doesn’t want smart meters,” he said. “Let’s make medical exceptions for everyone and remove the whole system at an expense of $14,000 of taxpayer money.”

YES! Let’s make medical exceptions for everyone! It’s called the Americans with Disabilities Act, and it’s the law!

And there must be some accounting error to be slapping a $14,000 price tag on it, not to mention the fundamental hate mongering of trying to turn tax payers against people with medical conditions or disabilities…

3 Responses to More Families Getting Water Shut Off, But Utilities Lack the Legal Right