I never look forward to doing this.   I’d rather be on the ground, stopping smart meters and standing up for our privacy, safety, and health.  But the reality is that campaigning has costs.  Our opponents are funded to the tune of billions of dollars, much of which is skimmed from your taxes and utility bills, and they have poured this money into groups like the Smart Grid Consumer Collaborative[1], which is spreading lies about the ‘smart grid’ and suppressing dissent.  They’re even going into schools now to teach (indoctrinate) children to think the smart grid is actually green. (it’s not)

We started our campaign three and a half years ago in June 2010.  It would be another year before the World Health Organization classified wireless emissions as a Class 2B toxic cancer causing agent.  It is a different landscape in 2013.  The problem has gone global, and so has awareness and resistance.  We have remained at the forefront of grassroots “smart” grid journalism,  while advocating for solutions and demanding justice.

Over the past two years, Stop Smart Meters! has worked closely with the makers of Take Back Your Power, providing Josh del Sol with background on the issue, hours of footage, and a global directory of anti-smart meter activists to guide him in his quest for the truth.  Now that the film is made, we are organizing screenings and community meetings, and in October we raised $12,000 for a massive bulk buy of DVD’s so people can provide the film to their elected officials and communities.

This past April, I wrote an opinion piece in the Wall St. Journal questioning the wisdom of ‘smart’ meters and raising the wireless health issue- not normally covered by the taciturn mainstream media.  We submitted testimony to the UK Parliament and the FCC, presented at numerous meetings and conferences including ones in Dublin, Ireland, Dublin, California and Sussex, England and conducted countless interviews with local media outlets across the US and around the world.

Our humble little wordpress-based Stop Smart Meters! website has spawned dozens of other, allied groups around the world, and provided technical and scientific research that legitimize and empower campaigns to roll back and prevent deployments.   We are a grassroots movement seeking  to expose the truth about “smart grid” and re-instate local control in our communities.   We support legitimate legal efforts and awareness and pressure being brought to bear on public officials.  But likewise we also believe that the public already has the power to reject this monstrous, brutal corporate program.  We do not have to ask anyone’s permission or beg for our own privacy, safety, and health.  These are basic human rights.  At the end of the day, when it is necessary, we know that our willingness to disobey the “authorities” and take direct action that is protective of our communities is ultimately what will determine the outcome of this campaign we are engaged in. 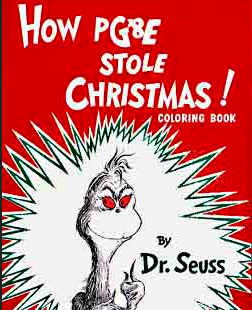 It’s important to remember that California authorities and utilities wouldn’t have backed off their absurd “mandatory deployment plan” had it not been the direct pressure of communities organizing to have the foul devices removed and returned to the utility themselves.   The subsequent embarrassing Grinch-like disconnection of electro-sickened-kids-during-Christmas and the negative publicity and public ridicule that followed revealed the industry’s true colors and forced a (meager and inadequate) ‘opt out’ policy out of them.

We are not under some rose-tinted assumption that if we are successful and end up banning smart meters, that everything will be peachy.  The ‘smart’ grid emerged from a corrupt corporate culture that is responsible for countless crimes against nature and humanity.  Stopping smart meters would be equivalent to hacking away one branch of a tree- but it’s clear that as a movement, we need to hack away at the root of this evil, and when it has finally been stamped out, we need to plant a new kind of tree, together.

Stop Smart Meters! is not (ultimately) about the meter.  It’s about recognizing the connections between this one, unwelcome device forced on our homes and an entire worldview that threatens our lives and our species’ future on this planet.  It’s about acknowledging the severe health damage being done by wireless technology- not just the meters.  It’s about exposing and halting an overbearing, invasive spy program run by the government against the people.  It’s about focusing on the things that unite the political right and left, rather than the things they try to divide us with.   It’s about documenting the deterioration of democracy and empowering the public to demand it back.  It’s about questioning the utility services we have come to depend on and forging new community solutions to make these greedy corporations irrelevant.  Ultimately, it’s about discrediting and overcoming the mechanistic view of the world that treats humans and other living beings- even the Earth itself- as a commodity from which to extract profits.

An Analog Philosophy of Organizing

Our monthly bulletin, like our philosophy, is purely analog (at least as analog as you can get on a digital device).   We do not use graphics, photos, or other distractions that might impede those with dial-up connections from reading important updates about the movement.  We try to keep the website as simple as possible, because we know that the people who need it most are often in transitional or temporary housing where high-speed broadband isn’t always available.

Over the last year, Stop Smart Meters! has published exclusive news coverage  of the following issues- stories that would simply not be covered if it were not for our work.

Please Do Not Donate to Stop Smart Meters!

If you do not have enough money for your basic needs- to pay for food, for your (skyrocketing) utility bill, or housing, DO NOT donate to Stop Smart Meters!  But if you find yourself instead in a position which allows you to share your funds, please contribute so we can continue our important work.  With the lack of functional regulatory agencies, it is up to grassroots activists to protect the public and publicize facts the industry would prefer to sweep under the rug.  That is our role and we take it very seriously.

Please contribute to help us make these things happen.  We simply cannot do it without your support.   While the smart grid industry (and most corporate non-profits) could burn through $100K in an afternoon without even blinking, far less than that amount would revolutionize our work and provide a budget for advertising and public outreach that would keep the smart grid advocates on the run.  To those who have already donated, we thank you sincerely.  If you appreciate this website and all we do to keep up the good fight, please support us and donate a little or a lot by the end of the year.  If you are interested in making a tax-deductible donation, please contact us for details. Thank you. 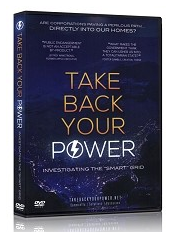 You can also support SSM! through your holiday shopping and raise awareness at the same time.   We have DVD copies of the documentary Take Back Your Power, as well as new smart meter warning stickers available through our online store.  Free shipping within the United States.   Order by this Thursday Dec. 19th to ensure priority delivery before Christmas.

We thank you for your support and will now return to our regularly scheduled programming.  We’re grateful for every action you take and every person you educate about this issue.  Together, let’s make 2014 the year the ‘smart’ meter- and all it stands for- dies a well-deserved death.

[1] We don’t recommend visiting the SGCC site as (according to Google) smartgridcc.com is an “attack page:” “Attack pages try to install programs that steal private information, use your computer to attack others, or damage your system.”  In other words, exactly what the smart grid does…