If you witness a smart meter installation occurring in unincorporated Santa Cruz County, or any of the dozen other local jurisdictions who have criminalized ‘smart’ meters, call law enforcement. Santa Cruz County Sheriff is at 831 471 1121

As you probably know if you follow this website, PG&E has begun to install wireless “smart” meters in Santa Cruz County- the home of Stop Smart Meters! , violating our democratic right to decide what technology we allow in our own communities.  This is not a war being waged with guns and bombs, but rather glossy mailers, full page newspaper ads, tv ads saturating the airwaves, and of course- microwave radiation.

Why would PG&E need to advertise a product we’ve supposedly already bought?  A product they claim they have full legal rights to install.  Why are they spending millions of our ratepayer dollars to convince us to accept a device that now 45 California local governments have told them is not wanted?

It’s because they realize that our campaign is having an impact.

The truth has a funny way of getting out there.  A corporation like PG&E can spend millions on a promotional campaign, manipulating mainstream media coverage of an issue but they can’t prevent people from holding up banners on he side of the road, or making copies of the flyers they just received to warn their friends and families about the wolf in sheep’s clothing at their door.   They can’t control the internet, with the thousands of reported ‘smart’ meter caused illnesses and malfunctions.  Grassroots organizing terrifies the corporations.  And so it should.  Particularly right now when PG&E has bungled their ‘smart’ meter installations badly and put the whole ill-conceived “smart” grid at risk.

At the end of the day should we be surprised that people are wise enough to see through the gimmicky ‘smart’ advertising from the utility?  That people care more about their health, their privacy and their safety than the vague promises of being able to “see your power” and unsubstantiated greenhouse gas reduction promises?

How do we know this?  We don’t have high priced market research firms like PG&E- but we do speak to our neighbors, and we’ve noticed that when we hold a banner over the highway that the number of honks and thumbs ups we receive has been increasing while the number of middle fingers has (thankfully) been declining.

Nevertheless, PG&E and Wellington Energy are installing as we speak while people are away at work, sneaking around backyards and forcing the devices onto people’s homes.

So if it is illegal, where is law enforcement?

Democracy and defending the constitution apparently mean very little to Santa Cruz County Sheriff Wowak, who has refused to enforce County ordinance 5084 that makes it a crime to  install a “smart” meter in the county.   When we called his office to report a crime in progress, his officers responded and arrested us for peacefully blocking the illegal installations.   Imagine calling the sheriff to report a burglar in your house.  The sheriff responds, but instead of arresting the burglar, he arrests YOU for getting in the burglar’s way, thus facilitating the theft in progress.  If you have any thoughts about this situation, you might want to share them with Sheriff Wowak at 831 454 2242.

The other day we received an interesting new publication in our mailbox- the “Smart Reader” July edition.  We thought we’d share this with you in case you live outside of Santa Cruz County and didn’t receive one of these fantastic publications.  Independent journalism at its best. 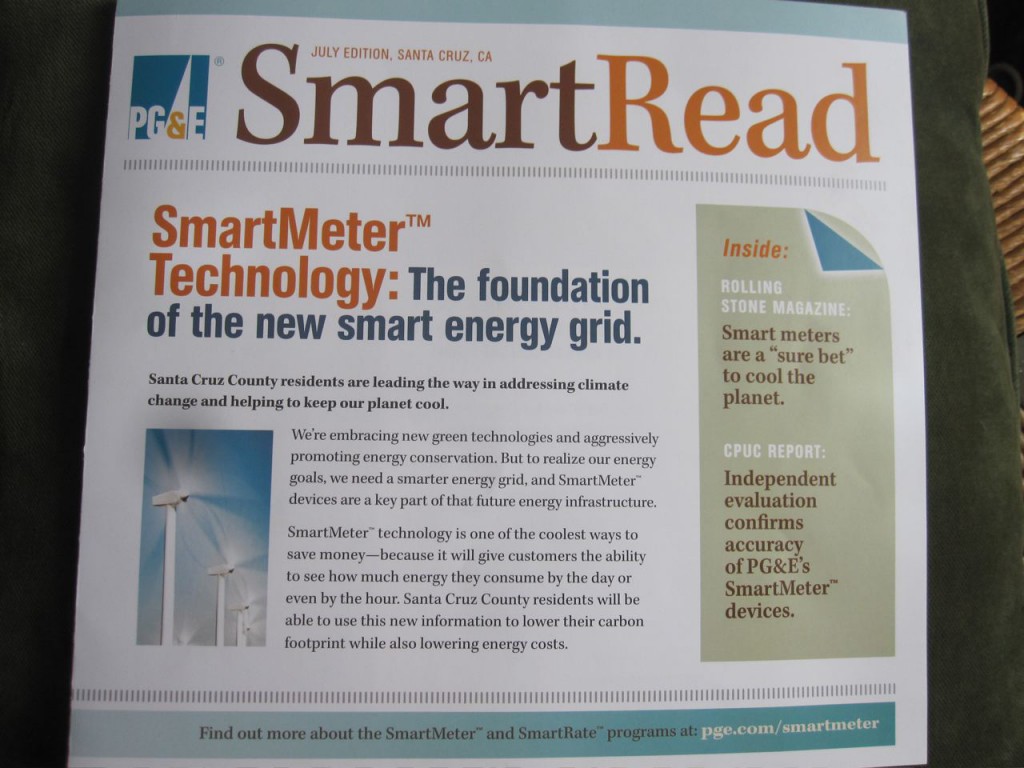 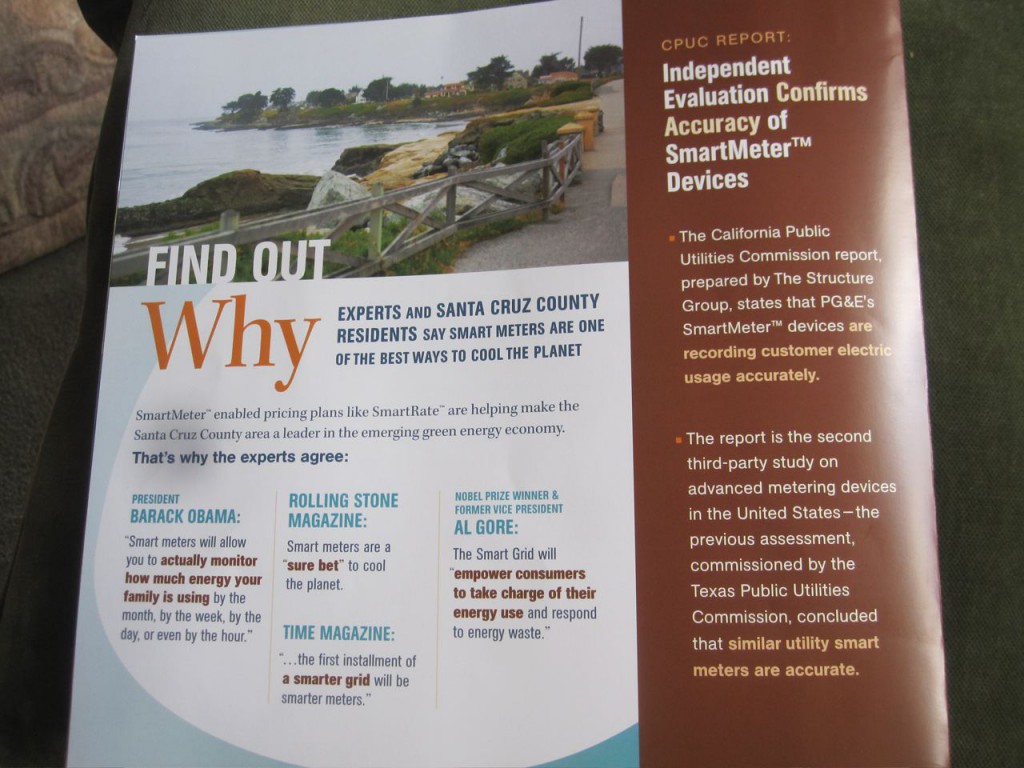 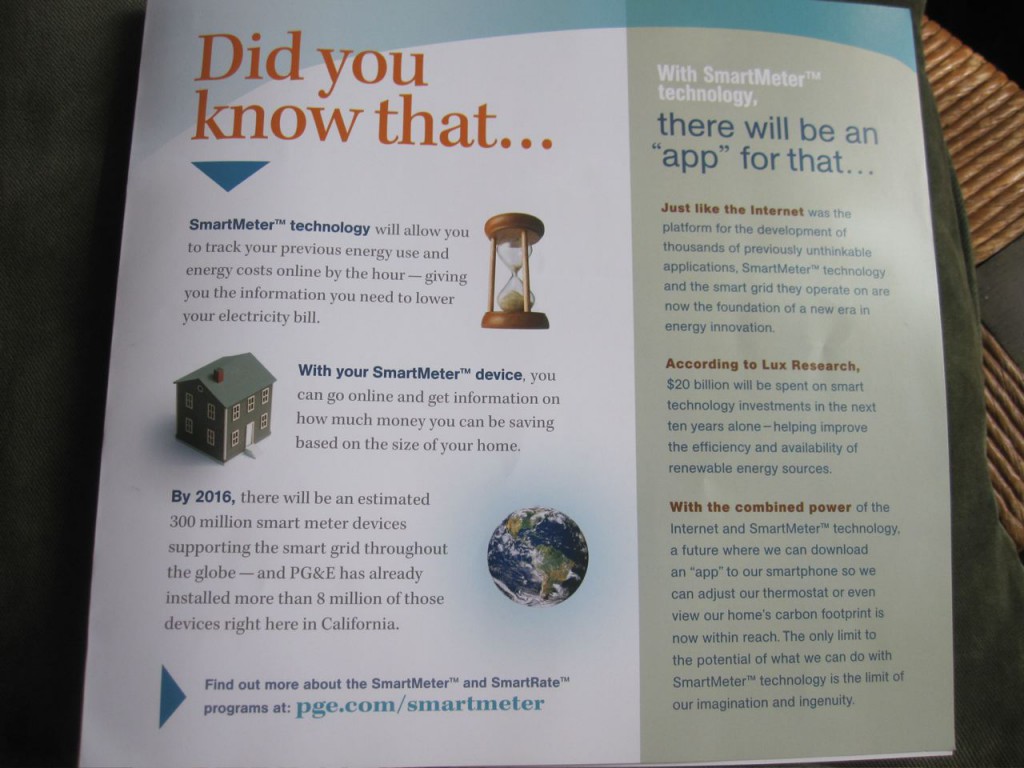 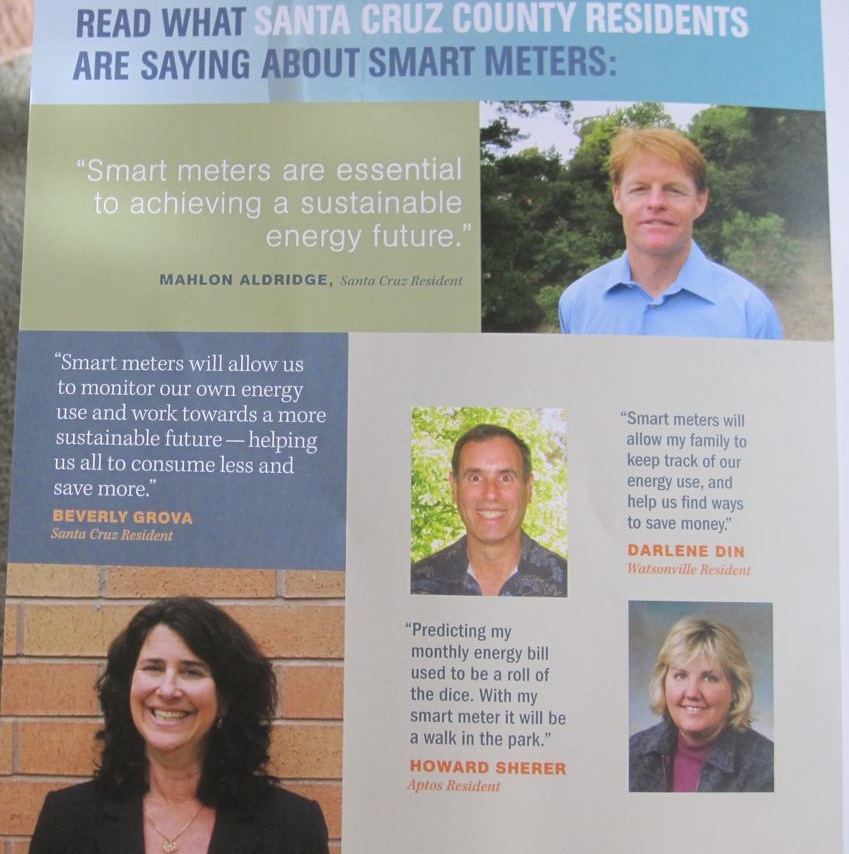 Coming soon: Who ARE these people who allowed PG&E to use their name and image to greenwash a dangerous product to the good people of Santa Cruz County?  And how much did PG&E pay them?  Stop Smart Meters! investigates- coming next week.

13 Responses to Winning Hearts and Minds in Santa Cruz County