“Smart” Meters are digital utility meters that send customers’ detailed usage information to the utility using a radio-frequency transmitter (or over the power lines in the case of Powerline Carrier (PLC) systems.  Some meters (AMI mesh networks) also contain other capabilities, such as remote shut-off.   Smart Meters are part of a larger plan to change the electricity grid to a “smart” grid–though there is controversy about whether the customer meter is actually crucial to that change. Electric smart meters are replacing older analog style meters, while gas “smart” meters are generally small devices attached to existing gas meters.  Wireless water meters are also being installed in many regions.

“Smart” meter planning in the United States is related to the Energy Act of 2005 and administered by the US Dept of Energy, the FCC, and each state’s public utilities commission (PUC). However, in that Act, there was NO mandate to force all residential customers to accept installation of “smart” meters–only that they would be offered. Local utility companies in many states have been approved to install “smart” meters but this does NOT mean you have to accept them on your home or business. 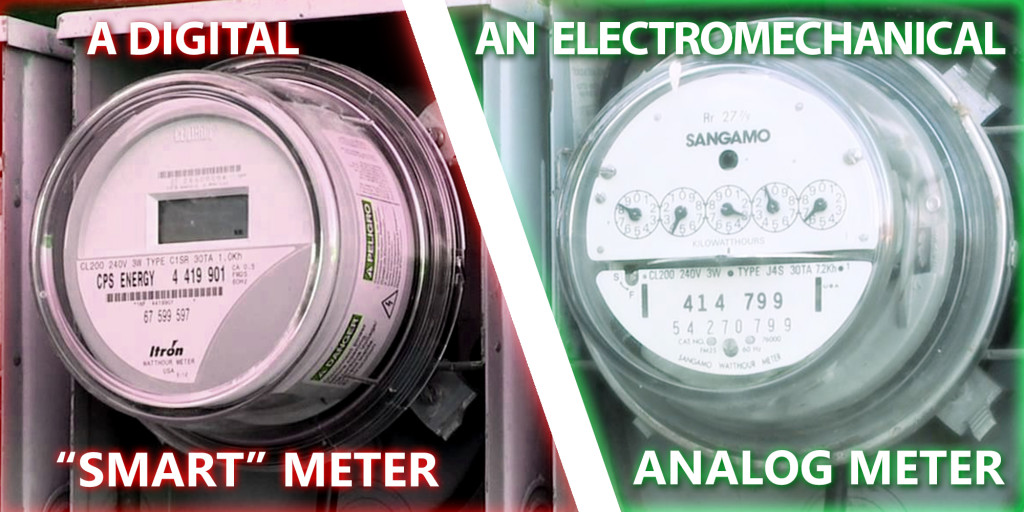 Non-transmitting analog (mechanical) electric meters typically have 5 small clock-like dials and a glass casing which allows you to see the spinning dial inside. “Smart” meters have digital displays and plastic casings which you cannot see into.  Recent “smart” meters often have the word “smart” on the front, but absence of this label is no guarantee it isn’t transmitting. There are a very few mechanical meters which have a wireless-transmitting capability, which can only be identified by measuring RF emissions.

Utilities use a dizzying list of acronyms and technical terms to describe their ‘smart’ grid systems.  Many insist that their meters aren’t the ‘smart’ meters that have been causing all the problems. ALL of the meter types below are ‘smart’ and are associated with health and safety problems:

AMR (Automatic Meter Reading- or ERT) meters are typically wireless one-way meters that report usage to utility personnel in a vehicle with a handheld device. Includes ‘bubble up’ meters that transmit all the time, and ‘wake up’ systems that transmit when they receive a signal.

“Radio Off” Digital Meters can still act as a surveillance device.  They also use switch mode power supplies, linked to dirty electricity and health problems.

Bottom line: A ‘smart’ meter is any utility meter that contains electronic components.  Do not accept anything less than a ‘purely electro-mechanical analog meter with no electronic components.’  Be aware that some utilities have been installing meters that appear to be analogs but in fact are fully activated ‘smart’ meters.  More on the “trojan horse analog problem” here.

Q: Can a “smart” meter be harmful to my health or unsafe?

Wireless “smart” meters emit radio-frequency microwave radiation (called “RF”), similar to that used by cell phones and wifi routers. The transmissions from “smart” meters go on day and night, and are not directly related to the amount or time of household usage. See section on Mesh Network. This frequency is part of the range of frequencies recently placed in the category “possible human carcinogen” by the World Health Organization (May 2011).

Public health professionals and scientists have been concerned about human exposure to this type of low-level radiation for some time now. You may have read about ways to reduce your exposure to the RF from your cell phone. But a “smart” meter is an RF emitter that you have no control over. There is no “off” switch, nor can you move it to a different location in your home. See section on RF Radiation Issues, or section on Health Issues.

Q: How could the government allow “smart” meters if they are harmful or unsafe?

Many scientists and academics have written to government agencies in charge of the decision to deploy “smart” meters, to alert them as to the possible dangers in such a widespread public exposure to RF, and to urge commissions in charge of overseeing utilities to exercise more precaution. Examples: Here is a letter from the California Department of Public Health (pdf). This page contains other objections submitted to the California Public Utilities Commission from medical and public health authorities and qualified individuals.

While the elected bodies of some towns, counties, cities, and states have taken notice of the dangers involved, many have not, choosing instead to swallow the assertions made by utilities of public safety and cost-saving. Often small government agencies are at the mercy (or in the pockets) of the utilities they oversee, which are large, well-financed corporations, and thus don’t heed these calls for caution.

In the U.S., the Federal Communications Commission, a regulatory body with no doctors or medical professionals on staff, has set the guidelines for public RF exposure at a very high level, based on biased and incomplete science dating back to the 1950s. The FCC also appears to have waived some requirements for “smart”-meter manufacturers, allowing them to bend several rules that were intended to protect the public, such as not locating one transmitting meter near another transmitting meter (colocation). See this post about the FCC and “smart” meter violations. Apartment dwellers need only look for the “bank” of meters that service their building to see the precaution about colocation violated.  Another provision that is ignored is the 20cm distance that is supposed to be enforced, keeping people from coming closer than that (about 8 inches). No “smart” meter that we are aware of has ever been installed in a way intended to keep people at that minimum distance.

Another FCC violation is the matter of transmitting power. A recent admission from a “smart” meter manufacturer affirmed that because of the type of antenna in their “smart” meter, the power of the transmitter may exceed the FCC limits. [See Sept 14, 2011 CPUC “opt-out” workshop videos, Part 2, at 0:13 and Part 5 at 0:16].

The current attitude of governmental bodies in the United States is that if radiation doesn’t heat tissue, it is considered safe. Ionizing radiation (e.g. x-rays) can alter molecular structures and standards for this type of radiation have been established. Non-ionizing radiation (such as cell-phone and “smart”-meter radiation) has been considered safe by government agencies because it doesn’t heat at lower levels of exposure. But a growing number of scientists, researchers, and experts feel this is a flawed position. Clear biological effects have been observed at “non-thermal” levels–most notably DNA breaks, breaches of the blood-brain barrier, and increases in brain glucose metabolism.

The RF emissions spikes from “smart” meters are supposedly under these very liberal FCC guidelines, but if the guidelines are flawed, as many who study the effects of low-level RF on humans and animals think they are, then “smart” meters are indeed a very dumb idea. See also: The Bioinitiative Report; The Seletun Statement; The  Sage Report on Smart Meter RF

Q: Who, then, does the “smart” meter benefit?

Only the utility companies benefit. The utility can save itself money by getting rid of meter readers. Because the “smart” meter measures hour by hour, the utility can charge you more for electricity used during certain periods of the day of their choosing.

Their story is that this device will save you money. But there are no studies, no evidence, to back this up. In fact, in the one study done so far (from Canada), customers’ bills went up, not down. There is only one thing that will save you money on your utility bill, and that is using less electricity or gas. This is easily achievable by reducing your use of high-wattage devices (e.g. electric clothes dryer, air conditioner, and so on), choosing energy-saving appliances when it’s time to buy, and taking care to switch off electrical items not in use. Here are some ideas.

Q: I don’t want a “smart” meter. How can I avoid having one installed?

Three things: Secure your analog meter (make sure it is one first!); write your utility to let them know you refuse any “smart” meter; and/or prevent trespass on your property by your presence. Be aware that measures other than these, such as signs, have failed. Utilities have also destroyed locks and vandalized property but this opens them up to property destruction charges.

Take action now to safeguard your old meter. Prevent tampering by following some of the suggestions on this pages: Defend Your Analog Meter.

If your state or area has an opt-out, call now to make your wishes known. If it does not have such an option, advocate for it and in the mean time, take direct action and secure your analog meter. Without an opt-out, you can try calling, but your utility is very unlikely to want to allow you a choice, as they save money getting rid of your meter reader, and the mesh network depends on everyone having one of these meters. Still, some people have demanded their right to an analog, and done so repeatedly, and been able to keep or regain an analog. Prevent regret by securing your meter now.

Some people have suggested posting a sign alone is sufficient, but we have heard of too many signs simply ripped down by installers to recommend that you rely on this.  You should also adapt and send these letters, but letters alone are no guarantee of avoiding installation.

Your bodily presence on your property is the best protection you can have. You have the right to prevent trespass on your property. Even one renter can ask a trespasser to leave from a building or complex. Installation periods for your area are the time to be on guard. This is difficult for many who work, but you can authorize someone else to act in your place if you need to, including neighbor. Here’s one neighbor’s story of protecting his neighborhood.

Preventing access does not mean you don’t want to pay your bill or cheat your utility; it is protecting your health and safety. If you need to, learn to read your own meter and post the numbers for your current reader, if you have one still, or send them to your utility—so that you can protect your meter by limiting access.

The bottom line is that your utility has no legal right to force a “smart” meter on your home against your will.  They will threaten you with fines and service disconnection but in the end they do not have a legal right to force a device that emits what even the World Health Organization considers a Class 2B carcinogen.

Our advice is to lock up your existing analog meter securely, and ignore their letters.  Talk to your neighbors and if they come to the neighborhood be prepared to drive them away.

If they disconnect your power, contact your public utilities commission immediately–they cannot disconnect a paying customer. Write us and we will publicize your story–that is just the sort of publicity that utilities try hard to avoid.

Make a Call (or better yet, write a letter via certified mail) to your utility (number is on your bill) and tell them you demand an analog meter. Ask to speak to someone in management. If you have been made ill by your ‘smart’ meter, tell them about it in detail. Tell them you know of the people who have gotten analogs. Tell them you are going to the press if they don’t do the same thing for you they have done for others.  Do not accept a digital non-transmitting meter— be aware they also have problems, and are not stable and secure like analog meters. Do not take ‘No’ for an answer—ask to speak to someone higher up and do not give up.

Some people, desperate to regain their health, have had ‘smart’ meters swapped out for analogs by electricians. Please read our section on changing a meter.

If you have suffered health damage from smart meters, file a complaint here:

BACK TO FAQ INDEX